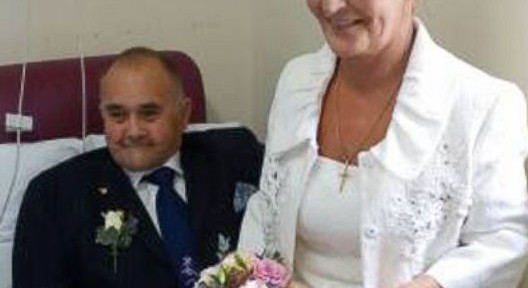 Arthur Holland fulfilled his dying wish yesterday after marrying his childhood sweetheart, Val Cowen, whom he fell in love 50 years ago.

Cowen, 64, said she she first met Holland, 69, in 1965, when he asked her to dance. After that the two dated but the relationship only lasted nine months. “The first time when I broke it off I think I just got bored,” she said laughing. “It’s the only way I can put it. I was so young you see, you want to spread your wings. I wasn’t taking things so seriously then.” But then the spark was rekindled, “Because they said he was terminally ill, he wanted to marry,” Val Cowen of Blyth, England told ABC News today. “All Arthur ever wanted was to marry me. “I’m bursting with pride,” she added. “I’m happy to be his wife, but there’s also a sadness that goes with it.” “He’s never done that before in his life,” she said. “I was 15 going on 16 and Arthur was 19. Yes, we fell in love.” h/t abcnews

In light of his bleak prognosis, Cowen said Holland asked the staff at the Royal Victoria Infirmary in Newcastle, England if he and his longtime love could marry there in the hospital.

At 1 p.m. yesterday, the couple finally tied the knot in a small ceremony among loved ones complete with flowers, champagne and wedding cake.