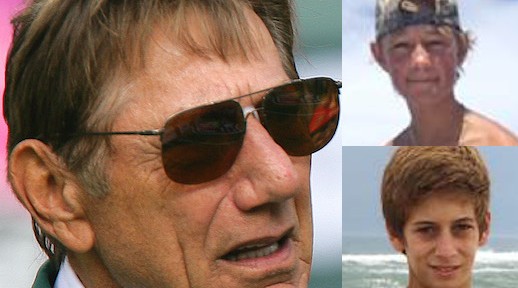 Hall-of-Fame NFL QB, Joe Namath has joined in the hunt of two teenage boys, Austin Stephanos and Perry Cohen, who went missing while boating off Florida’s east coast. Namath is helping get the word out that the family is now offering a $100,000 reward for anyone who helps locate and bring them home safely.

Stephanos and Cohen, both 14, were were last seen around 1:30 p.m. buying fuel for their single-engine boat. Family says the boys were out for a fishing trip off the coast of Jupiter, Florida when they vanished. Despite the Coast Guard and multiple rescue agencies employing aircraft and boats to search thousands of nautical miles the boys remain missing.

Namath, who is is a long time family friend appealed to the public for help,

“We’ll keep on looking until we find them,” the Super Bowl-winning quarterback said. “We’re all praying. … The good Lord’s gotta help us out.”