The bedbug problem has hit a frightening new level in New York. A poll conducted by the Daily News tells a story of an infestation of epic proportion.

One in 10 New Yorkers have recently battled bedbugs in their home and that’s double city estimates from 2009.

The poll reveals almost one million of those living in New York have bedbugs living in and on the mattresses.

The buggy problem spans all classes, covering all five boroughs, from the Bronx to upper Manhattan.

Bedbugs are tiny little devils and they are hard to kill. They move around by crawling on fabric such as, luggage, apparel and furniture.

NYC is spending a million dollars on fighting the small insect, however, this new breed of super-bug is resistant to most pesticides.

The poll found 67% of people living in New York thought they could best discover the bugs by looking for bites, but scientists insist only 50% of people will have an adverse reaction that is usually from the bedbug’s secretions. Most have no evidence of being bit. 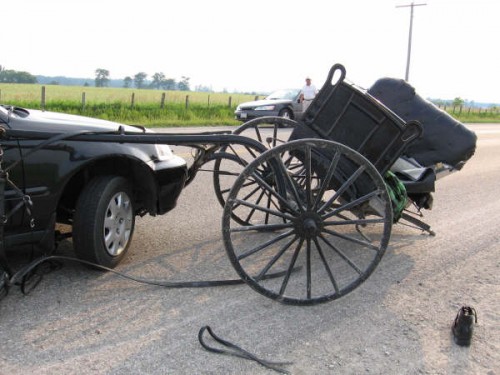 BUFFALO: An Amish teen ran a stop sign and cops attempted to pull him over for his infraction but he took off running, literally, putting his vehicle in to high gear to evade police, and what was the make a model of his vehicle? Horse and buggy.

Seems Levi didn’t want the fuzz to catch him as he was in position of alcohol so the chase was on, that is until Levi tried to make a hard corner into a driveway and ended up crashing in to a ditch.

After the cops stopped laughing uncontrollably, they charged the boy with alcohol by someone under 21, overdriving an animal, second degree reckless endangerment, failure to stop at a stop sign and failure to yield to an emergency vehicle. No word on just how Levi is going to explain this one to the parents.

The New York Victoria Secret store on Lexington Avenue at 58th Street had to be closed for several hours while a bed bug infestation was eradicated.

The PR department underscored the disgusting find by releasing this statement, “As a proactive measure, we tested our Manhattan stores. When we found small, isolated areas that may have been impacted, we immediately took action to resolve the situation.” No word on if any of the bugs made their way home with customers who purchased the provocative undergarments, however, common sense says they most certainly did.

New York has become a hot bed for the nasty little buggers, recently forcing the extermination of Abercrombie and Fitch and Hollister apparel stores. These city bed bugs seem to fancy the finer locations, congregating in stores and homes located on the plush upper east side of Manhattan.

Bed experts say bed bugs do not carry disease and although they do feast on human flesh, their bite is rarely felt by humans.