Interstate 15 CLOSED! So How Do We Get To Las Vegas This Weekend? 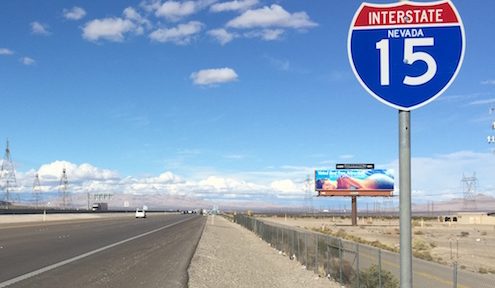 Interstate 15 is closed after the Blue Cut Fire ravaged the popular Las Vegas bound route. The blaze has shuttered the most direct route between Las Vegas and Los Angeles, but where there’s a will to party, there a way.

Fortunately, Interstate 15 is not the only way to get your Vegas fix, other less-traveled routes exist for motorists who absolutely have to get there. The following routes detail Nevada to California routes, however, if you’re traveling from So Cal to Vegas, simply reverse the route. The route to take is dependent on the final destination. The most recent report from the California Department of Transportation is that I-15 is closed from Phelan Road in Hesperia to the freeway interchange of Interstate 215 in San Bernardino, a distance of about 18 miles. The most popular alternatives will take travelers westaround the fire. In Victorville, motorists should turn off I-15 at the Palmdale Road exit, California Highway 18, and take it west to California Highway 138. Motorists can bypass Palmdale by taking the Pearblossom Highway to connect with California Highway 14, which leads to Interstate 5 in Santa Clarita. From there are multiple alternatives to freeways leading to Los Angeles and its suburbs. A less traveled road for the more adventurous that accesses the Inland Empire and the communities south and east of San Bernardino takes motorists through the heart of the Mojave National Preserve. Travelers can take the Cima Road exit off I-15 about 60 miles south of Las Vegas and drive south through Cima and Kelso. Known locally as Kelbaker Road, the route crosses Interstate 40 and moves south and west to Amboy. The road south from Amboy eventually joins California Highway 62 near Twentynine Palms before intersecting with Interstate 10. From there, motorists can access multiple freeways to their destinations. h/t reviewjournal

While the alternative routes are viable for travel, motorists should remember that most of them are two-lane roads with speed limits that are lower than what they experience on the interstates. Motorists should also have the Caltrans Highway Information Network number available — 800-427-7623 — although there are some portions of the preserve that don’t have cellular phone service.