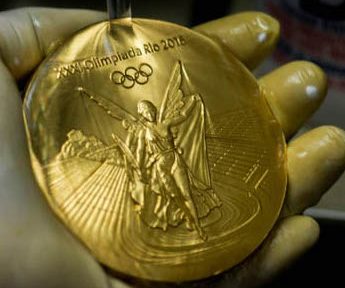 One would assume that Olympics medals handed out during the summer games in Rio are actually made of gold, silver, and bronze.. Guess again. The reality is more complicated.

Because distributing pure gold medals would be cost prohibitive, the actual gold medals are made mostly of silver with a thin layer of real gold bonded for color. The silver medal is made from silver that is recycled from, among other items, X-ray plates, car parts, and mirrors. Gold medals at the Olympics haven’t actually been 100% gold since the 1912 Olympics in Stockholm. Since then, they’ve actually been mainly made of silver, with a gold plating on top to give them the expected appearance. At the Rio Olympics, the medals are composed of 98.8% silver (with a purity of 92.5%), with the gold plating (of 99.9% purity) making up just 1.2% (6 grams) of the 500 gram medal. The gold content is notable in that it is entirely free of mercury impurities.

Compositions are variable at different Olympics; for example, at the London 2012 Olympics the gold medals consisted of gold (1%), silver (92%) and copper (7%). The value of the Rio Olympics gold medal, based on its metal composition, is approximately $565. Contrast this with their value if they were composed of pure gold: their current market value would be $21,200! The silver medals at the Rio Olympics are actually as advertised; impurities aside, they’re composed entirely of silver (with a 92.5% purity). This differs from the London 2012 Olympics, where the silver medals were 93% silver and 7% copper. Around 30% of the silver used in the Rio medals is obtained from recycled sources, including X-ray plates, car parts, and mirrors. The value of the silver medal based on the metal content is approximately $315.

For the Rio medals, around 40% of the copper was sourced from recycled materials at the mint itself, using waste copper from their usual coin-minting processes. In terms of monetary value, the bronze medals are worth much less than both the gold and silver medals, coming in at just $2.38 using current market values. h/t woburn.wickedlocal