Muslim Mike Tyson On Donald Trump: He Deserves A Chance 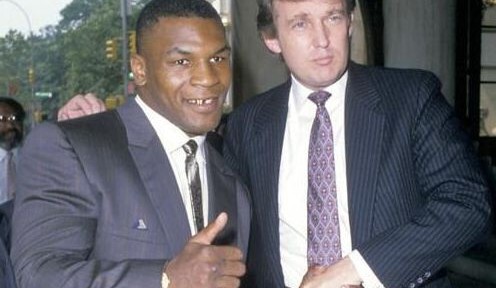 Mike Tyson may have converted to Muslim, but that isn’t stopping the boxer from continuing to endorse Donald Trump for President.

Trump caused an uproar over his proposed Muslim ban, but even though Tyson’s Muslim, he still thinks he would make a great commander and chief. Tyson first endorsed Trump back in October — saying Obama’s plans aren’t working and he believes it’s time to “try something new.” But after Trump suggested a new plan to ban Muslims from entering the U.S. — and faced a HUGE backlash from Muslims and non-Muslims — we asked Tyson if this was the final straw. “Hey listen, anybody that was ever President of the United States offended some group of people,” Tyson said at the airport in D.C. “He deserves a chance.” h/t tmz Tyson converted to Sufism. In December 2013, he talked about his new religion saying he is very grateful to be a Muslim and that he needs Allah.