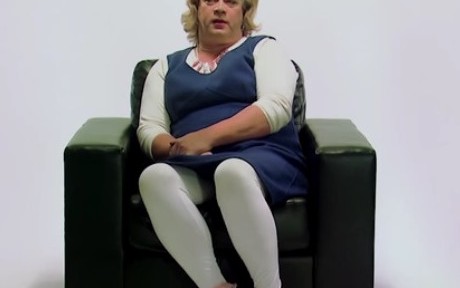 Stefonknee Wolscht gave up his life as a man, husband and father of seven children to become a six-year-old girl.

Wolscht, 46, says he is now living with his adoptive family who accept him and the fact that he doesn’t “want to be an adult right now.” “I can’t deny I was married. I can’t deny I have children,” Wolsht said in a video produced by the Transgender Project and published by the Daily Xtra. “But I’ve moved forward now and I’ve gone back to being a child.” That video can be seen above. The YouTube video description says the “rejection” from Wolscht’s family and friends “left her feeling alone and suicidal. That was until the day she realized she could find love and acceptance as a six year old girl.” Wolscht’s wife, however, wasn’t about to tolerate the change. According to the Independent, Wolshtt was told in no uncertain terms to either “stop being trans or leave.” examiner Wolscht left and now lives with a family she says is “totally comfortable with me being a little girl.” In fact, Wolscht’s “new parents’ youngest granddaughter wanted a little sister and decided Ms Wolscht should be younger than her.” “We have a great time. We color, we do kid’s stuff,” Wolscht said. “It’s called play therapy. No medication, no suicide thoughts. And I just get to play,” his new family commented.