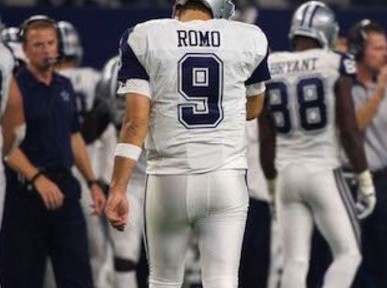 Dallas Cowboys‘ owner, Jerry Jones says his star QB, Tony Romo is out for the remainder of the season.

Romo suffered a hairline fracture in his left clavicle during Thursday’s 33-14 loss to the Panthers, in what many are calling a way too early return to the field. In week two Romo was sidelined 8 weeks with a fractured left clavicle. It was reported Thursday night that the Cowboys did believe Romo would be done for the season. The team wanted Romo to undergo more tests on Friday which included a CT scan that further confirmed the team’s initial fears. Romo said that the injury “felt similar” to the one sustained in Week 2 that kept him out for eight weeks. Romo fractured his left clavicle against the Eagles in the second game of the season. 24/7sports

Quarterback Matt Cassel has now take over as starting quarterback.

The Cowboys fell to 3-8 on the season.