(Via Fox Sports) Despite their best efforts, the Dallas Cowboys‘ helmets will not feature a decal supporting Dallas police officers this season.

According to Brandon George of the Dallas Morning News, the NFL denied the team’s request for permission to include a decal reading “Arm In Arm” on their lids for the upcoming season. That decal, which the team has been wearing on its helmets during training camp, is in support of Dallas Police and the officers killed in July’s sniper attack. After hearing back from the league on Wednesday, Cowboys vice president Stephen Jones gave the following statement, as reported by George. END_OF_DOCUMENT_TOKEN_TO_BE_REPLACED

Regardless of how you feel about their performance on the football field, Americans everywhere should be cheering the Dallas Cowboys for the message they just sent to leftists, including Divider-in-Chief Barack Obama, with their pro-police tribute. END_OF_DOCUMENT_TOKEN_TO_BE_REPLACED Photographers and other media members took pictures and video of Romo and other Cowboys running onto the field Saturday. It’s one particular photo of Romo that led to concerns from fans that the quarterback is overweight. END_OF_DOCUMENT_TOKEN_TO_BE_REPLACED A Dallas County grand jury has handed down a true bill of indictment against former Cleveland Browns quarterback Johnny Manziel, a source in the district attorney’s office told News 8. The indictment, on a misdemeanor assault charge, is expected to be formally announced Monday. END_OF_DOCUMENT_TOKEN_TO_BE_REPLACED

Dallas Cowboys‘ owner, Jerry Jones says his star QB, Tony Romo is out for the remainder of the season.

Romo suffered a hairline fracture in his left clavicle during Thursday’s 33-14 loss to the Panthers, in what many are calling a way too early return to the field. In week two Romo was sidelined 8 weeks with a fractured left clavicle. It was reported Thursday night that the Cowboys did believe Romo would be done for the season. END_OF_DOCUMENT_TOKEN_TO_BE_REPLACED

Tebow was recently sent packing by the Philadelphia Eagles – To the chagrin of many suffering from Tebow Mania. NFL Line judge Gary Arthur was carted off the field after getting run over on a Baltimore Ravens punt.

Early reports say Arthur has a broken collar bone. The game, between the Denver Broncos and the Ravens, resumed with only 6 referees. According to docs, obtained by TMZ, the wrestling org. got a restraining order against Montalvo earlier this month after a string of violent run-ins at the facility. END_OF_DOCUMENT_TOKEN_TO_BE_REPLACED “One person was killed Sunday when a single-engine plane crashed and burned during takeoff at Compton-Woodley Airport. END_OF_DOCUMENT_TOKEN_TO_BE_REPLACED

Check out these billboards that have been cropping up across the state of Michigan! This one is on I-69 near I-75 in Flint Township. 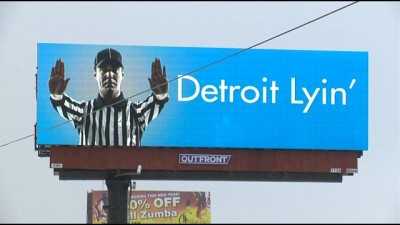 An anonymous group of fans paid to have the billboards put up after the Lions lost following a bad call in Dallas. END_OF_DOCUMENT_TOKEN_TO_BE_REPLACED