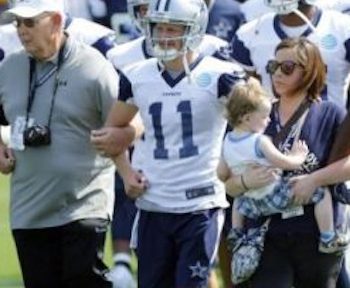 Regardless of how you feel about their performance on the football field, Americans everywhere should be cheering the Dallas Cowboys for the message they just sent to leftists, including Divider-in-Chief Barack Obama, with their pro-police tribute. The sight itself was jaw-dropping, but the massive stand is what’s really impressive as they boldly defied the false narrative promoted by Obama and his fellow progressives.

As the Cowboys’ training camp began, players took the field in waves, but it’s not the famed NFL players that left people jaw-dropped. Arm-in-arm in a display of solidarity, they escorted special guests onto the field in a tribute that’s making headlines for all the right reasons.

To pay tribute to the 5 fallen Dallas officers, players, including Jason Witten, Tony Romo, and Dez Bryant, walked arm-in-arm onto the field with families of the Dallas police officers killed by a gunman last month, Right Wing News reports. The move was much different than what we saw at last week’s Democratic National Convention, where criminals were applauded and our lost law enforcement officers were seemingly forgotten, and it left an impression on Dallas Police Chief David Brown, who was present as well.

A helmet decal was unveiled, which the Cowboys will wear in the preseason and possibly the regular season. It reads, “arm in arm” in a circle around a star meant to symbolize a mix of the Cowboys’ famous logo and the star Dallas police wear on their uniforms. madworldnews Some folks on social media think the classy move was anything but: