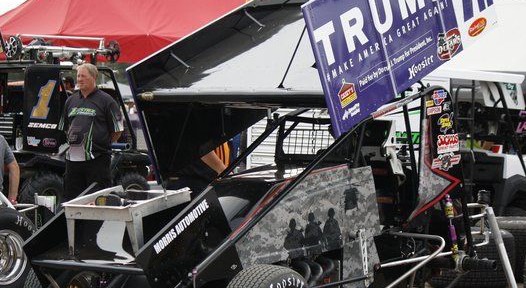 Donald Trump has devised a unique way to advertise his campaign for president, on a Sprint Car.

Trump’s campaign slogan will be displayed at this week’s Knoxville Nationals after he sponsored a car owned by Bruce Williams and driven by Roger Crockett at Sprint Car racing’s biggest event. Crockett’s car showed up at Thursday’s second night of qualifying for the Knoxville Nationals with his wing wrapped in Trump’s logo, which says “Make America Great Again.” It gained quite a bit of attention. According to the team, Trump is helping out with tires and fuel. The Trump tour bus has a spot reserved at the National Sprint Car Hall of Fame Friday night. “We have a lot of messages on our car,” Williams said. “We have the military on one side and cancer awareness on the other side. h/t pennlive

The sponsorship took three weeks to complete, as it first had to be approved by Trump’s legal team.