Robin Williams Emmys tribute helmed by Billy Crystal is under fire for including what is being dubbed by some on social media as ‘racist.’

The brouhaha is over a stand up joke about Muslim woman where Williams uses a scarf as a prop. 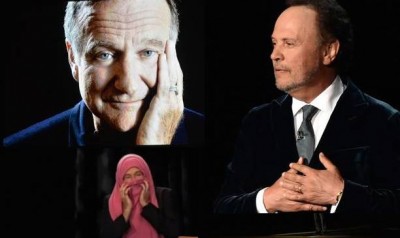 It included a short snippet of a stand-up performance during which Williams borrows a pink scarf and puts it on his head like a Hijab.

“He could be funny anywhere. We were such close friends,” Billy Crystal said in his speech for Robin Williams in a tribute to the comedian.

“He made us laugh. Hard. Every time you saw him – on television, movies, nightclubs, arenas, hospitals, homeless shelters for our troops overseas. And even in a dying girl’s living room for her last wish, he made us laugh. Big time. “I spent many happy hours with Robin on stage,” he continued. “The brilliance was astounding. The relentless energy was kind of thrilling. I used to think if I could just put a saddle on him and stay on him for eight seconds I was going to do OK!”

And for the most part, the audience at home and in the Nokia Theatre crowd appeared visibly moved by the segment.

That is until the honour ended in a series of clips of the comedian in action, cracking jokes during televised interviews and in stand-up.

In particular, it included a short snippet of a stand-up performance during which Williams borrows a pink scarf from an audience member in the front row and wraps its round his head to simulate a Hijab, or Islamic headscarf.

“I would like to welcome you to Iran… Help me!” he cries.

The person putting together the Robin Williams segment for the Emmys decided to use his racist material.

I’m still so shocked that the #Emmys would include such a racist bit in Robin Williams tribute. Out of all his great work, really?

Like, now I just think Robin Williams was kind of racist? Thanks Emmys.

After that, people who’d never heard of Robin Williams would think he’s Billy Crystal’s racist friend who was on a lot of talk shows?