Stupid is as stupid does and let me tell you something, this is one dumb son of a bitch! She steals a dude’s iPad then signs in HIS iCloud account and UPLOADS PICTURES OF HER FACE! To the photostream! Really? What a goddamn dummy! HAHA! 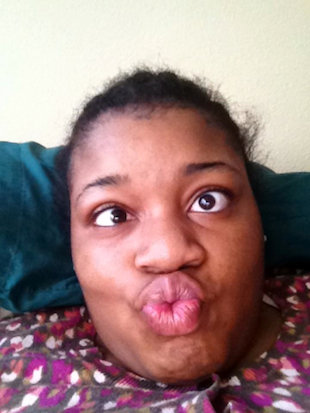 Losing your iPad is bad enough — but really? How dumb do you have to be to steal an iPad and then upload your own bizarre pictures to said iPad iCloud photostream?! Are you kidding me?

“It’s been a continuing fountain of entertainment for me,” siad the victim, Allen Engstram, “It’s just like I’ll wake up one day and they’ll be new pictures there and I’m like oh my gosh, she has no idea.”

Engstram says he lost the iPad on a flight from Phoenix to Denver, then one day his wife asks him about the strange woman appearing in the family’s iCloud photostream!

“He said mommy, who’s this? And of course she said, I have no idea who that is. It showed up on my phone too,” Engstram said. “After a while we figured out what was going on. That’s the person that has my iPad.”

“Hey cool! This is an actual pic of the wonderful person who stole my iPad. Apparently the pics she is taking of herself are backing up and appearing on my phone. No I’m not kidding, this is really happening.”

“I have no problem with putting it on Facebook, because hey, it’s fun for me and it’s apparently fun for a lot of other people,” he told a local TV station. “And there’s always the chance that someone will say hey, I know who that is. And I want my iPad back.”