Ronda Rousey defends her Bantamweight championship belt against Liz Carmouche in the first round with her signature armbar submission at 4 minutes and 49 seconds. 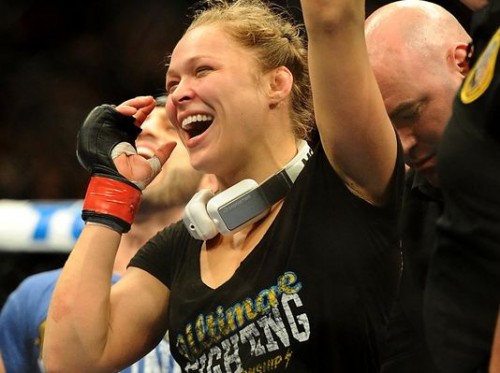 Carmouche was 11 seconds away from taking the fight into the second round; a territory Rousey has never been in her professional mixed martial arts career.  Rousey is now 7-0, she is perfect.

I soooo wanted it to go to the second round, this fight was exciting! Carmouche, a marine, came out and gave Rousey a fight.

Here is the fight recap: When the fight started Rousey came forward with a jab and Carmouche responded back with a jab of her own. Rousey kept moving forward to get close but ate a few defensive punches from Carmouche. Rousey gets in the clinch with Carmouche and tugs down and gets her in a headlock. But Carmouche reverses and gets Rousey’s back and tries to sink in a rear-naked choke. Carmouche is basically piggy-backing Rousey trying to sink the choke in. But she can’t fully get her arm under her chin so she resorts to cranking the crap out of Rousey’s face. Rousey’s face is turning red and it doesn’t look good for her. Somehow Rousey muscles her way out of the neck crank and stands while Carmouche is on her back. Rousey throws some punches to her opponents face and lands in side-control, has Carmouche in a headlock and punches her with her other hand. Then Rousey mounts Carmouche and goes in for the kill. Rousey pulls out an armbar with 11 seconds left in the first round. 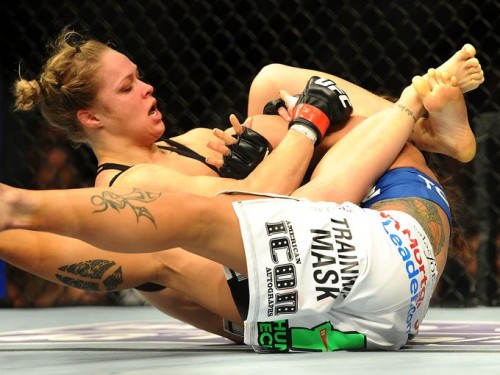 Wow! Go ladies! Move aside boys the women are doing there thing!