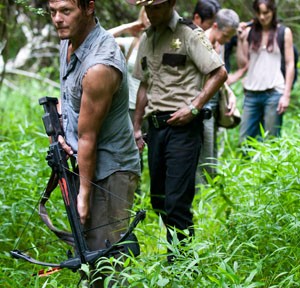 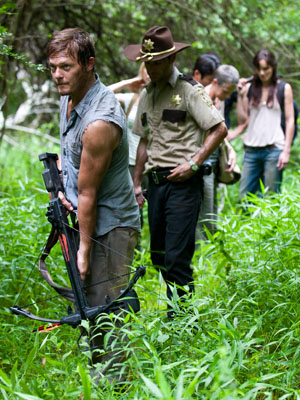 When I first stumbled across this article claiming to have the spoiler for the season ender to The Walking Dead, I was a little skeptical but after reading it, I think they may be on to something…

“Shot opens in Atlanta: a group of walkers are feasting on what looks like Rick’s horse, or what’s left of it, when they’re startled by the sound of a helicopter flying overhead. The horde migrates over several days, weeks, a great distance, and eventually comes to a fence. The fence bows and breaks under the relentless forward motion of the walkers. The herd presses on. Wandering aimlessly in the forest, the walkers turn as a gunshot goes off like a beacon, leading them to dinner. Soon they are closing in on Rick and Carl, as they leave the scene of Shane’s murder.

Daryl and Glenn arrive back at the farmhouse. They explain that they heard a gunshot, and share their confounding findings about Randall.

As they walk back to the house, Carl asks Rick about what happened to Shane. Soon after, they notice the walkers bearing down on them, and it’s not long before they are overtaken and have to make a run for the barn. Back at the house, the rest of the survivors are just figuring out that Carl is missing and walkers are approaching. Lori is panicking. Hershel passes out the guns.

The horde is making quick work of the barn. Rick dumps gasoline everywhere, busts open the door to lure the zombies inside, and climbs up to the loft with Carl. Carl drops a lighter into the gasoline-soaked hay, igniting everything in sight. Meanwhile, the men and Andrea shoot from their cars in a futile attempt to corral the herd and buy time.

Finally, Daryl figures out that Rick and Carl must be in the barn, and instructs Jimmy to drive the RV to the barn to rescue them. Rick and Carl manage to barely escape, while Jimmy is devoured inside the RV. Blood is everywhere, coating the windshield.

The survivors are starting to run out of ammo. The horde is too large.The women hold hands and make a run for it as Hershel makes a last stand for the farmhouse. They are just about clear when Patricia is attacked from the side and is devoured while Beth is still holding onto her.

Carol is headed off by a few walkers and backed into a corner with nothing but a plank of wood to defend herself. Andrea saves her but is attacked from behind and gets pinned under a walker. T-dog pulls his car around, but quickly has to leave the scene with Beth and Lori before the car is overtaken.

Glenn tells Maggie that the farm is lost; they have to get off the farm, now. Hershel comes to the same realization, almost too late, as a walker sneaks up from behind. Rick saves Herschel and they along with Carl head out in their own direction. Glenn and Maggie take off as well. Daryl finds Carol about to collapse from running, and they speed off together on Daryl’s motorcycle. Andrea is abandoned. The barn collapses into the flames. And we’re not even halfway done.

The group is now scattered. Glenn and Maggie switch places in the car as Maggie breaks down and can’t continue driving. Glenn says they need to make their way to the highway, but Maggie protests that the herd came from that direction. Glenn finally tells Maggie that he loves her.

Rick, Carl, and Hershel arrive at the highway, where they left the care package for Sophia, hoping that the others will think to rendezvous here. Hershel is ready to part ways, but Rick wants to stick together.

Lori and T-Dog argue over where to drive. T-Dog wants to head to the coast, but Lori threatens to jump out of the car if he doesn’t turn around and go back to the highway.

A walker appears on the highway. Rick is about to give up on waiting any longer, but… in the nick of time, the other survivors arrive. Time for a head count:

Meanwhile, Andrea is running for her life in the woods, but the walkers pursue her tirelessly. She can’t keep this up for long. Walkers are emerging from the trees in random directions as Andrea shoots to clear a path.

The survivors leave the highway, pushing onward, but soon run out of gas. Several people start to panic and are on the verge of giving up. Rick tries to pull everyone together. The conversation turns to Randall and Shane. Rick has to come clean. He reveals that the secret Jenner whispered to him at the CDC was that everyone is a carrier of the infection. The group is not happy that Rick has kept this from them.

Andrea is exhausted. This is the end of the line. She can’t carry her gun-bag any longer, her pistol is out of ammo — she bashes in a walker’s head with it — now she’s down to knives, another walker practically on top of her… enter Michonne to save Andrea at the last minute, towing two armless walkers in chains, samurai sword in hand.

The rest of the survivors set up camp in the middle of nowhere. They may have found each other again amid the chaos, but the group is still broken. Many are ready to run off into the dark and leave Rick behind, fend for themselves. They are on the verge of splitting up again, when Rick takes back control… he says they’re not going anywhere; he killed his best friend for them. This isn’t a democracy anymore.

The camera pans up… in the distance looms a prison facility.