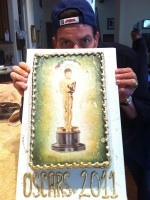 121
SHARES
POST NOWTWEET NOW
Charlie Sheen just joined Twitter today, and he seems to be loving it! Sheen got his full name granted as his Twitter username, and I have to wonder if he paid off someone that already got it first?

Sheen was so proud of this work-of-art cake masterpiece, that he tweeted a picture of him holding up the cake for everyone in the world to see! On the cake, an Oscar statue’s head was replaced with Sheen’s head, and at the bottom of the cake, it says “Oscars 2011”.


As you can see, Charlie not only has a sweet spot for women, but also has a sweet tooth for good cake and art. That must be why Sheen got this cake from none other than West Hollywood’s finest cake shop: “Cake and Art”, ThecounT.com learned exclusively from an inside source. This cake shop makes cakes for celebs, TV shows, movies, and they also serve them for everyday people. “Cake and Art is cool because you can just walk in the shop and buy yummy cupcakes, cookies, chocolates and even pup treats. You or your assistant can order personalized cakes and other treats for parties while you’re in the store, or you can even do it over the phone”, our source tells us.

Our source told us, “Sheen’s cake was designed by Kody Christiansen, who has also designed cakes for Britney Spears, Katy Perry, Lady Gaga and Rihanna to name a few.” Sounds like Mr. Christiansen is like the next ‘Wolfgang Puck’ of cakery! If you’re in West Hollywood area and you have a sweet tooth like Charlie, I’d be sure to check out the shop. CakeandArt.com is their site.