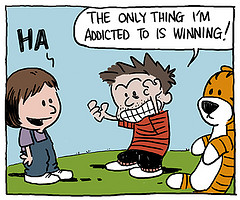 If you’re a little late on the amazing Charlie ‘Sheenisms‘, here’s a little starter guide to get you in the swing of his slang. Good luck grasshopper. Read, use and prosper!

Definition: Winning on the ultimate level.
Usage: I’m not bi-polar, “I’m bi-winning. I win here and I win there.”

Definition: Getting divorced four times in a row (kind of the opposite of a hat trick).
Usage: “I tried marriage. I’m 0 for 3 with the marriage thing. So, being a ballplayer — I believe in numbers. I’m not going 0 for 4. I’m not wearing a golden sombrero.”

Definition: The Beverly Hills home where Sheen claims he’s healed himself “with the power of my mind.”
Usage: “We couldn’t really call it rehab because we didn’t have a license to operate one, so it was a crisis management center that we labeled the Sober Valley Lodge. … Its primary client achieved radical success.”

Definition: Admirable women whom one may look up to.
Usage: “The goddesses are free to do what they do in my house.”… “No [I don’t sleep with both goddesses in my bed] because we are adults and we realize that three in a bed is like, we are all not seven.”

Definition: Sheen’s nickname for himself, based on his preferred position between his two blonde 24-year-old girlfriends, a.k.a. “the goddesses.”
Usage: “It’s a wedge. Boom. You form a wedge to make room for the guy carrying the ball.”