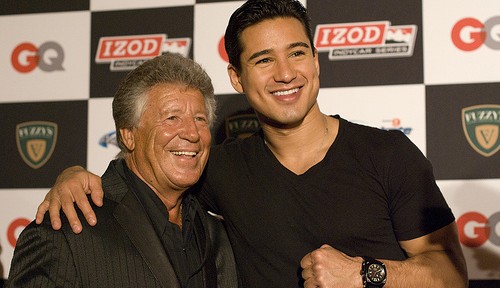 ***Full picture gallery at bottom plus footage from Carb Day and IZOD’s “Race to the Party”!!!***

I just love visiting my hometown Indianapolis, Indiana during Memorial Day weekend! The Memorial weekend fun is doubled, because the Indianapolis 500 has sponsored events in the city all weekend leading up to the Sunday race. Friday, there was “Carburetion Day” at the track. This is when all of the drivers get to practice on the track, and there are also pit-stop challenges. Although I really enjoy the racing part, I also love going to people watch! You can guarantee you’ll run into an old high school buddy, maybe an old teacher or even a cousin! The most interesting people watching part is the drinking that goes on there. 1 out of 5 people bring a cooler of beer. People get so drunk all day, in the hot sun, and things are way out of control by the time the official Carburetion Day band goes on. It is worth seeing the shenanigans!

Then Saturday arrived too fast! More parties all over Indianapolis! First, my Mom Nancy and I enjoyed the free “Darling Stilettos” concert on Monument Circle. “Guns N’ Roses” and “Velvet Revolver” drummer Matt Sorum backed the 4 girls up as they tore down the stage with their sexy rock n’ roll act. I must say, they are definitely in close comparison to the “Pussycat Dolls”, but way edgier and cooler. Nice one guys!

After the concert, we then went to IZOD’s “Race to the Party” event on Monument Circle. I must say that I was very impressed already, just by looking at the outside decor of the party. There was a huge Hollywood style red carpet with IZOD models on deck posing with guests. There were pretty ladies and nice looking gentlemen checking in guests and escorting them into the party. There was a great DJ and a live drummer duo that got everyone in the mood just before entering the party. As we walked into the party, there were male IZOD models dressed in racing suits who greeted us kindly.

Inside the doors, we were greeted by more female IZOD models. As we began to walk around, we couldn’t believe just how many more female IZOD models were scattered throughout the party, dancing on blocks! There were at least 30. Trays of hors d’oeuvres went by as we made our way to the middle of room to see what everyone was looking at. There were 2 contortionists hanging by ribbons from the ceiling. They were entangled by their individual ribbon, spinning around upside down, with nothing more to grab onto. What a great act!

We then made our way into some of the lounges that all had their own bar and really chic chairs and couches. All drinks were free and so was the water! You got to love that! Everyone was dressed to the 10. There were stunning women dressed in satin mini dresses, while men wore cool suit coats.

Whilst hanging out and people watching, my Mom Nancy and I had some great celebrity sightings! (When it comes to celebrities visiting Indianapolis, my Mom is all over it! She knows exactly which celeb will be at what event. Hey, my Mom was born in Speedway and her Mom who was also celeb crazy, worked with the Hulmans at the track for years. We’ve got 3 generations of Indy 500 credentials!)
We first saw actor Adrian Grenier walk into the party, who stars on the HBO hit show “Entourage”. He showed up with his own real-life entourage, which included a few friends and some of his band members from “The Honey Brothers”.  Adrian and the band were having a great time in Indianapolis, and they were really loving the police escort treatment!

We then went upstairs to see the other half of the party, and made our way to the VIP area. We didn’t go into the VIP room since we didn’t have passes, so we sat on a bench, just outside of the room, to rest our feet. Sure enough, we saw celebs going in and coming out. We saw racer Arie Luyendyk Sr. looking handsome as always. We then saw racing legend Mario Andretti in the vicinity of “Prison Break” star Armaury Nolasco. My Mom even said she saw Indiana local celeb/model Linda Vaughn who was “Miss Hurst” back in the 60’s!

We went outside to get some air, and we then saw actor and host Mario Lopez on his way in. He was really kind and waved to my camera. We also saw actor and friend Jeremy Renner (“The Hurt Locker”) taking photos on the red carpet. He was having a great time visiting Indianapolis!

We went back inside the party and watched “The Honey Brothers” perform. All 5 band members are super cool! This new-wave folk band is based out of New York, and actor Adrian Grenier plays the drums. There are so many actors that also have talent in music. It seems to go hand in hand. Their music was so fun and positive, and, it was great to change up the tunes from the bass-filled radio hits to some original, tasteful music. A ukulele, a banjo and keys, gives “The Honey Brothers” the extra individuality that sets them apart from the rest. Oh, and so does the “All Access” VIP passes that guitarist Mr. Andrew Vladeck gave to my Mom and I :) Thanks Andrew!

My Mom and I finally had passes to get into the VIP room, so we went to go see what the fuss was all about (Remember, the VIP room was upstairs). We raised our eyebrow and flashed our “All Access” passes to the security guards as we finally got in. Inside the VIP room, the DJ was nice and loud, and party people were dancing on platforms, near the windows, that overlooked Monument Circle. The packed room had it’s own bar and chic couches and tables throughout. The dancefloor was full of pretty people holding free cocktails-happy as clams!

We then spotted a major celebrity! HELLBOY was hanging out smoking a cigar! Ron Perlman from “Hellboy” and “Sons of Anarchy”, was enjoying the festivities. Ron and I took a photo together, and then, he insisted that I take a photo of him and my Mom together! As soon as I snapped the photo, I was suddenly pushed out of the way by a man flying across the room. I scrambled backwards and so did my Mom. A narly fight broke out between 2 angry men. Tables got knocked over and so did innocent bystanders! Other guys got involved and just before it was way out-of-hand, HELLBOY SAVES THE DAY! Ron Perlman splits the fight apart in a snap! As soon as Ron got in the middle, it was like the fight had never happened. It was over for good! It was jaw-dropping amazing! After the fight was over, I then realized the photo of my Mom and Ron probably didn’t come out because of the man flying through the air! After Ron took a breath from saving the night, we asked Ron if he would retake the picture with my Mom and he smiled and laughed!!! Huge LOL!

After our brush with Ron Perlman, we then left the party on a high note. My Mom and I hit the red carpet on our own terms, and no security bothered us finally! Hey, we came with regular tickets and left with All Access baby!

As we walked to our car, we discussed the fact that we were so happy that Indianapolis put on such an amazing, star-studded weekend. The concerts and the parties were tip-top Hollywood style. Indy really got it right and on-point this year! What a blast! We can’t wait until next year!!! A special thanks to long time friend Brian Schmidt for coming through with IZOD “Race to the Party” tickets!