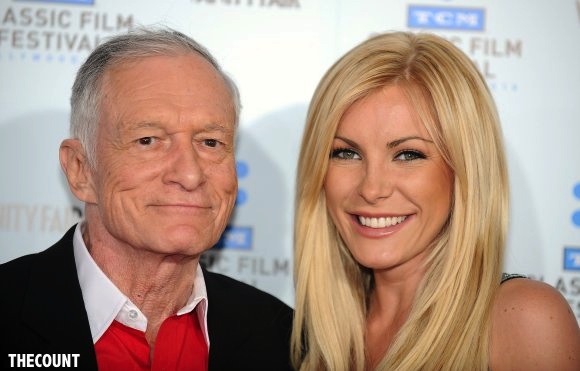 Oh no! Hugh Hefner has lost his mind! Not really, he doesn’t have Alzheimers or anything, but you’d think he does, now that he’s back with that girlfriend Crystal Harris. 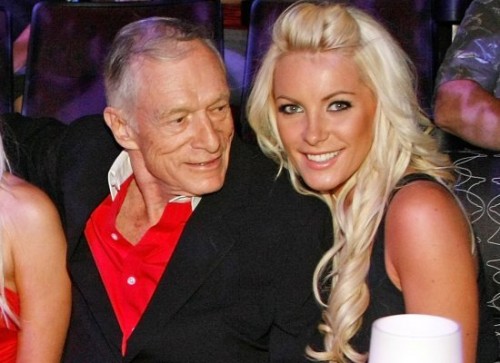 Harris, being all of 26-years-old, and Hef at 86-years-old, must have re-thought her questionable future all this time she’s been away from Hef and dating other dudes. But what about Hef? He’s fine with taking her back?
END_OF_DOCUMENT_TOKEN_TO_BE_REPLACED

It was a mother-daughter Memorial Day affair for Jamie Lynn Spears and daughter Maddie Briann Aldridge. 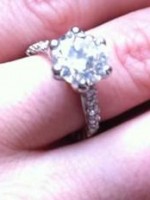 TMZ says that Harris didn’t have the paperwork on the ring, so she called the Playboy mansion to get it faxed, but it took too long to send, so she left the store.

Would you buy the ring for your honey? :)

LOS ANGELES, CALIFORNIA – Cooper Hefner (second from left) posted this photo on his Twitter having dinner at Katsuya with his father Hugh Hefner and Hugh’s fiance Crystal Harris. Elder Hefner freaked folks out at the posh hot spot by bringing his own food with him to the restaurant! potatoes and pork chops.

If you’re wondering, Cooper’s mother is former Playmate Kimberley Conrad whom Hugh wed in July 1989 and filed divorce from in 2009, after having been separated for years. Photograph: Cooper Hefner via Twitter.

Today, our favorite sinning senior, Hef, announced he popped the question on Crystal, and apparently she said, “yes.” Hef posted this message on his Twitter, “When I gave Crystal the ring, she burst into tears, This is the happiest Christmas weekend in memory…I got what I was hoping for for Christmas…Crystal’s love.”

‘The average reader will go home with stories they can’t tell their wives and girlfriends but will last forever. Hef thinks of this as a golden dreams ticket. Jellinek said he dreamed up the idea after thinking about Wonka’s giveaway of five golden tickets in the wrappers of chocolate bars for a visit to his sweet factory.

LOS ANGELES, CALIFORNIA – Wednesday October 20 2010. Russian spy Anna Chapman poses for the Russian edition of Maxim! Miss Chapman was one of agroup of 10 Russian spies exchanged for four Western ones five months ago. Anna, who has been compared to a real-life Bond girl, has reportedly been trying to land a six figure sum for her life story and is considering posing for Playboy.

Chapman is on a real roll, last July Novelty toy company HeroBuilders launched an Anna Chapman toy action figure in two different versions: The The Predator and The Spy I Could Love each with a retail price of $29.95.

These days with “Avatar” “How to Train Your Dragon” and “Alice In Wonderland” all being presented in 3D, why not slide that technology over to the dark side? I’m talking about Playboy magazine. You heard right, for the first time ever, the Playboy centerfold will be presented in 3D, ZOMG! It seems to make sense, women’s not-so private parts jumping off the page in stunning 3D, however, the thought of men all over the world, in their bathrooms, wearing 3D glasses, (glasses included) just creeps me out. Chances are it won’t bother Hugh Hefner a bit, after all, he’s seen enough double Ds in his life time, maybe the time has come to take it to the next level.

Can we just discuss this and get it over with?  Rumors are running rampant right now claiming that Megan Fox has been signed and cast as Catwoman in Christopher Nolan’s next Batman film.  This is a lot of bull.

Firstly, Nolan isn’t even signed to direct a third Batman film yet.  Sure, he probably will but nothing has been inked at this time.  That means that a script hasn’t even been started.  There’s no story, therefore there is no Catwoman.  Therefore…well, you get it.   Also, Megan Fox is a bit too young for Christian Bale.  Being a massive Batman fan (seriously, it’s kind of sad), I can tell you that Selina Kyle, a.k.a. Catwoman, has to be the approximate age of Bruce Wayne, hence their bizarre on-again/off-again relationship.

Rumors about the third Batman film have been spreading like the plague this year.  Remember when Shia LaBeouf was supposedly signed on to play Robin?  Or how about when Eddie Murphy was cast as The Riddler?  These rumors are just that and there’s nothing to them.  They generate traffic to websites and it’s always fun to fantasy-cast but it’s kind of silly at this point.  We’ve still got some time before any official announcement about the third Bat-film is made.  At that time, let the speculation begin.  For the time being, don’t trust any of it.

Playboy’s “Girls Next Door” Kendra Wilkinson is capitalizing while she’s hot. Since the show ended, Kendra branched off from the other 2 ‘Girls Next Door’ ladies, and got her own reality show, but it hasn’t ended there.

If you watch this demonstration video, you can see that you will be able to do all the big moves without worrying about a pole break down.

“X-Pole US welcomes you to the exciting world of Kendra Sport Pole exercise and dance in your own home. Enjoy the exhilarating fun of a pole workout, spice up your parties or dance with your friends.
Whether a beginner, intermediate or professional, Kendra Wilkinson ‘Sport Pole’ is produced to the highest standards guaranteeing you the best pole experience on the market.”

You can buy it online here.

As Count reported, the plot above Marilyn Monroe is for sale at Westwood Village Memorial Park Cemetary! After hearing this, I just had to add to this saga!

Marilyn’s plot was originally bought by Marilyn’s ex husband and NY Yankees Baseball legend Joe DiMaggio, who sold it to a woman named Elsie Poncher, after divorcing from Monroe in 1954. END_OF_DOCUMENT_TOKEN_TO_BE_REPLACED