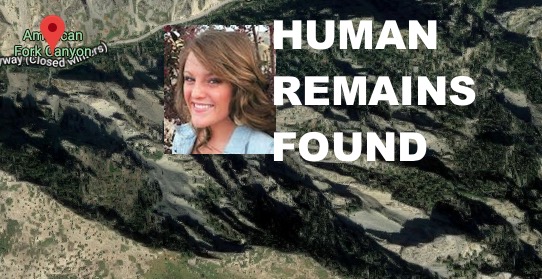 AMERICAN FORK, UT. (THECOUNT) — Human remains found by a climber in American Fork Canyon Sunday may be those of missing woman, Jerika Binks, according to reports. The deputies responded to the area, near the Swinging Bridge picnic site, which the press release says contained extremely rugged and steep terrain. The human remains were located on the north side of the canyon, about 850 feet above the floor of the canyon. Personal items were located with the remains that are consistent with what Binks had on her at the time of her disappearance, the press release said, reports HeraldExtra

Binks has been missing since she left her home near American Fork to go running on February 18, 2018.

The press release says that there is no evidence at this stage of the investigation to suggest foul play was involved in the death. The remains have been taken to the Medical Examiner’s office in Taylorsville, where positive identification will be made. Geo quick facts: American Fork is a city in north-central Utah County, Utah, United States, at the foot of Mount Timpanogos in the Wasatch Range, north of Utah Lake. It is part of the Provo–Orem Metropolitan Statistical Area. The population was 28,326 in 2015, representing a nearly 20% growth since the 2000 census- Wikipedia.