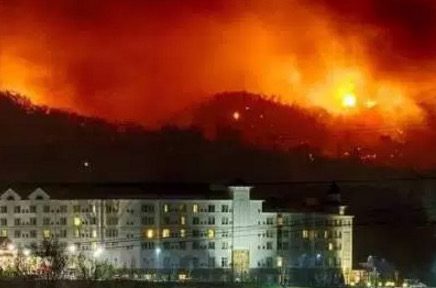 The flames reached the very edge of Dollywood, but the popular theme park, owned by iconic country crooner, Dolly Parton, was spared any significant damage. Other area attractions were not so lucky, Mystery Mansion burned to the ground. Fanned by hurricane-force winds, the fires spread quickly with winds topping 87 mph.

Residents and tourists alike in Gatlinburg, TN., were blindsided as police abruptly ordered them to get out immediately. Some guests and residents walked 20 minutes to get out of dodge, taking rides on trolleys usually reserved for tours and wedding parties. “There was fire everywhere. It was like we were in hell,” said Linda Monholland, who was working at Park View Inn in Gatlinburg when she and five other people fled on foot. “Walking through hell, that’s what it was. I can’t believe it. I never want to see something like that again in my life, ever.” The fires are approaching Dollywood, but as of Tuesday afternoon they had not hit the resort yet, ABC reported. However, cabins were evacuated and firefighters have worked around the clock to protect the structures. h/t heavy Photo taken by guests before skipping town show the fires fast approaching Dollywood, which is located about 9.5 miles away from Gatlinburg. Other area attractions did not survive the fire, including “Mystery Mansion,” located in Gatlinburg, only miles away from Dollywood.