Who Is That On Google Doodle Today? 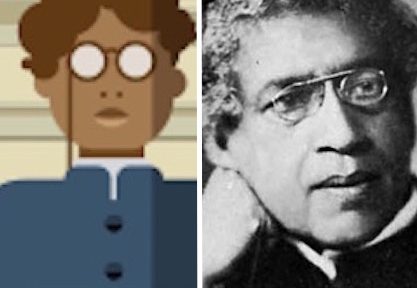 Google Doodle is celebrating Scientist and writer Jagadish Chandra Bose on what would have been his 158th birthday.

“Sir Jagdish Chandra Bose was a master of scientific achievement with numerous accomplishments in various fields,” Google notes, “Bose was to become known not only for his work in biophysics, but also his innovation in the world of radio and microwave sciences, ultimately inventing an early version of wireless telecommunication. As a testament to his numerous contributions to the field, a moon crater was named in his honor.” Here’s a few Bose fast facts: He was born in 1858 & became interested in science while studying under a jesuit priest at St. Xavier’s College in Calcutta. Jagadish Chandra Bose, who also went by J.C. Bose and whose name is at times spelled Jagdish Chandra Bose, was born November 30, 1858, in present day Bangladesh, according to his biography on FamousScientists.org. His father, Bhagawan Chandra Bose, was a Brahmo leader and civil servant. The younger Bose studied at the Hare School and St. Xavier’s School in Kolkata. He was then admitted to the University of Calcutta and studied at its affiliate, St. Xavier’s College, Calcutta. While at St. Xavier’s, Bose developed his interest in science while studying under Jesuit priest Father Eugene Lafont, a Belgian missionary known for his knowledge of natural science, according to Swarajya. h/t heavy

Bose graduated from the University of Calcutta in 1879 and later studied at Christ’s College in Cambridge.

He was married to Abala Das Bose, in 1887. She was a feminist who pushed for women’s education in India. She set up Nari Shiksha Samiti, which set up schools in rural areas.

Bose and his wife had no children.