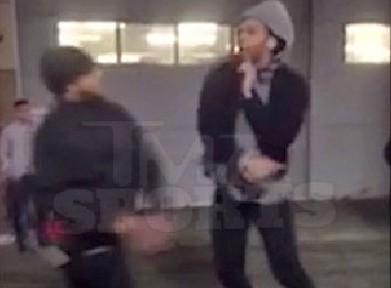 Jahlil Okafor caught on video brutally knocking out a 2nd victim on the streets of Boston.

Last week, Okafor made headlines after footage showed the NBA star getting into several brawls with revelers and fans. Witnesses at the scene tell TMZ Sports the new footage takes place AFTER the first fight on Nov. 25th … a little further down the street. In the video, you can see the 6’11” rookie trading insults with a heckler — while people in Okafor’s crew tried desperately to hold him back and walk him away from the situation. Okafor breaks away and throws punches at the heckler … and a melee ensues. You can see a man gets knocked out cold in the street — suffering gashes on his face — but it’s hard to tell who threw the punch. A witness tells us it was Okafor who “hit the guy with a haymaker.” h/t tmz

Boston PD is investigating both incidents and charges against Okafor are said to be imminent.