A group of teenage girl assaulted a roving ice cream man as he was delivering his frozen goods.

The teens were caught on video hitting the vendor over and over. 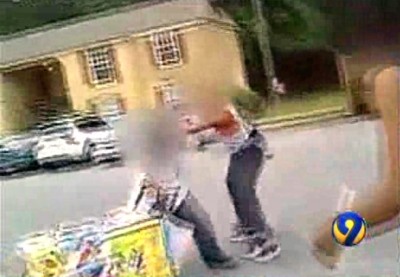 “It seems like he’s not trying to fight back initially, like he just wants to be left alone, and that’s the thing — you can’t even be left alone,” said Manuel Fuentes. He contacted WSOC about the video and said the young people should be arrested. It remains uncertain who shot the video. “It’s just not right because the man didn’t do anything,” he said.
source

Cops arrested one of the teenagers they believe was in the video — Daishaun Tyrone Burney. They charged him with common law robbery.

Officers said they were searching for two more people.

Some in the Hispanic community said crime victims who are undocumented sometimes don’t report the crimes because they fear deportation.

Police said they don’t ask about citizenship when investigating, so they encourage any victim to come forward quickly.