Security procedures at baseball games are starting to look a lot like your local airport, which begs the question, are TSA guards next? The Los Angeles Dodgers have officially implemented walk-thru style metal detectors, beginning next week. 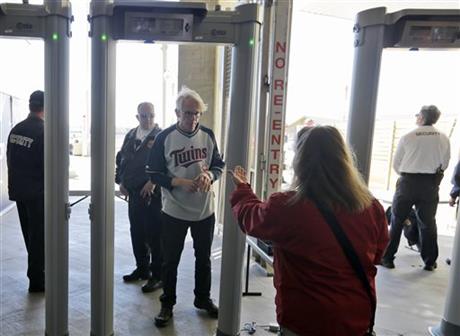 The move comes in anticipation of the MLB requiring their use for the 2015 season.

On Monday the Dodgers will start testing the walk-through metal detectors at several entrances to Dodger Stadium. A Dodgers spokesman said they are also scheduled to be tried Wednesday and at different times throughout the season in preparation of their full-time use next season.

Fans entering the stadium will pass through metal detectors immediately before having tickets scanned. Cellphones and what the Dodgers described to season-ticket holders as other “large metal objects” will have to be removed prior to passing through the magnetometers, but not shoes, belts or items smaller than a cellphone. source

Anyone not wishing to pass through the metal detectors can opt for being groped by a hand-held wielding security guard.