Bristol Palin Joan Rivers.. Is Hollywood that hard up for ideas that they would create a ridiculous promise like wife swapping one’s daughter and sister? Come again? 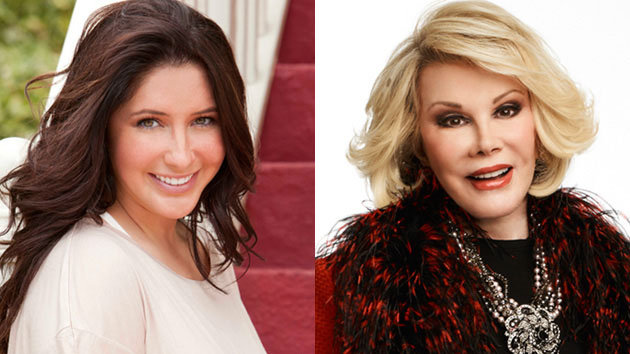 Bristol Palin and comedian Joan Rivers are set to appear “Celebrity Wife Swap,” but there’s one little problem, neither is married..

“Bristol and Willow Palin reside in Wasilla, Alaska with Bristol’s 4-year-old son, Tripp, who rules the roost,” ABC said in a synopsis Thursday.

“What Tripp says goes in the Palin household,” the network said. “When Melissa Rivers arrives in Wasilla, she’s surprised to see snow on the ground — in May! Meeting Willow and Tripp, Melissa finds it a challenge to deal with Tripp’s boyish exuberance, and feels that he needs to have a set daily routine.

“Aunt Willow is no help when it comes to discipline, and in fact is often the instigator behind Bristol’s back. But Melissa is determined to bring structure to the Palin home. … Joan and Melissa Rivers, one of television’s most popular mother-daughter duos, live together with Melissa’s 12-year-old son, Cooper, in her Los Angeles, Calif., home, which doubles as a television production office and the set of three TV shows produced there.

“Every day in the house is scheduled to the minute. While the Rivers’ home is bustling with assistants, crew members and cameras, the family still find time to sit down together for dinner every night. Stepping into Melissa’s shoes, Bristol Palin is not prepared for the Rivers’ formality and schedule, and is reluctant to fill in as executive producer of ‘Fashion Police.'”

I dunno about this one, sounds a little stupid..

In case you’re wondering, the new season of “Celebrity Wife Swap” is to begin June 23.