This young Donald Trump type, John Garcia, surprised for his prom date, Juliette Lundberg, with a lift to prom in a HELICOPTER! 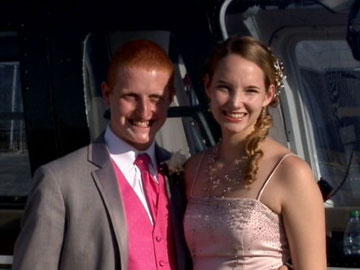 Turns out, Garcia is an intern with McMahon Helicopters in Canton, Ohio, and when he sheepishly asked his bosses if he could get a lift to the prom in a chopper, They said, “Why not!”

Garcia said his lady has been bugging him non-stop about proposed transportation to and from the prom,

“She kept asking like, oh, what are we doing for prom? Are we having a limo? I’ve never been in a limo. I was like, yeah, you know, we’re getting a limo. And then I told her, you know, we’re just coming here to get pictures with the helicopter and then surprised her,” he said.

Garcia told Lundberg let’s get our prom pictures taken in front of a helicopter. She thought they were there only for pictures, but then Garcia told her they were going to prom in a chopper.

Garcia and Lundberg are both second lieutenants in the Civil Air Patrol. Lundberg has been at the controls of a Cessna, but had never been in a chopper before now.

Garcia kept it all a secret.

“It was definitely worth it, every second. It was nice. Just her reaction was priceless,” Garcia said.

No word on if lover boy got any sky high action!