The scariest thing about this video is, Rachel Maddow is actually supposed to be an Obama supporter.. But the reporter in her trumped all party alliances with her frankly exposing, in her own CYA kinda way, another HUGE and soon to be breaking news problem for the administration in the growing IRS targeting scandal..

Turns out the unscrupulous agency provided PRIVATE UNPROCESSED tax information about several conservative groups! We’re talking applications that were not even approved! They gave all the sensitive docs to a watchdog website called ProPublica, expecting them to take the hint! 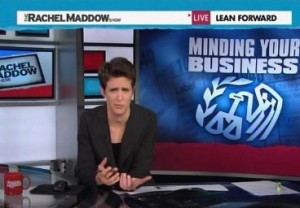 When ProPublica inquired to the IRS as to WHY they had received the docs, the IRS threatened them with a criminal lawsuit! Punishable by years in jail! THEY HAD SIMPLY RECEIVED THE DOCS ERRONEOUSLY! From the IRS! Are you kidding me?