I’m not ashamed to have watched quite a few telecasts of Robert Schuller emanating from the beautiful Crystal Cathedral in Sunny Garden Grove California. I thought it was a Sunday in Cali, hungover, tradition kind of thing… But apparently no, people watch the telecast all over the world! Well, they used to watch… 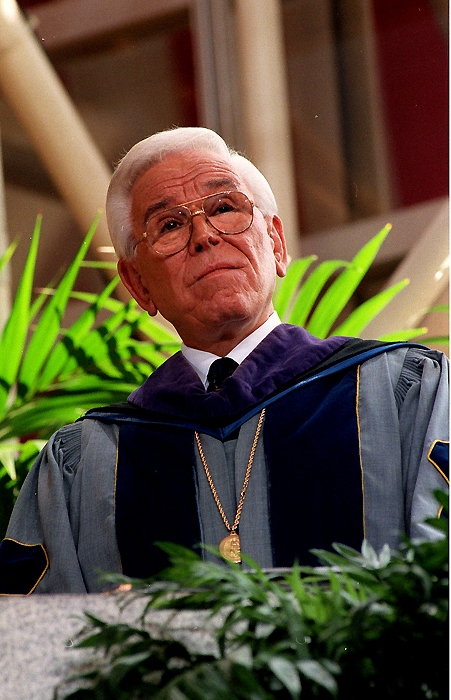 The ever trusty National Enquirer is reporting Schuller is basically on his last legs, literally, broke, senile and if that’s not enough, he may be soon homeless as well.

AT the age of 86, frail televangelist Robert H. Schuller is broke and could soon be homeless.

His family says the man who built the world-famous Crystal Cathedral is destitute after losing a court bid to wrest more than $5 million from the ministry he founded.

“Some days he’s lucid, and other days he’ll be in a fog,” revealed a former employee of the Crystal Cathedral.

His now-bankrupt religious empire included the landmark house of worship in Garden Grove, Calif., which has been sold to the Roman Catholic Diocese of Orange.

The white-haired, cherubic preacher and his wife Arvella severed all connections with the church earlier this year after repeatedly making major donations to help keep it running.

In late November, a U.S. bankruptcy judge rejected most of the breach-of-contract and copyright infringement claims that Schuller and his family had made against Crystal Cathedral Ministries.

The court awarded Schuller a scant $615,625 for certain expenses and unpaid compensation. His wife got nothing.

The award probably won’t even cover the family’s legal fees, and they may have to sell their home, according to their brokenhearted daughter, Carol Schuller Milner.

“The ministry said they would take care of them for the rest of their lives,” Carol tearfully told a reporter. “They’ve basically been left penniless because of their generosity. It’s very disillusioning.”

Hang in there Schuller! You of all people know that God works in mysterious ways.