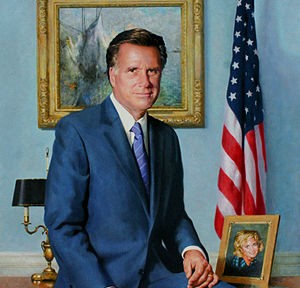 The following may sound like a deleted scene from the 1983 movie “National Lampoon’s Vacation” but I assure you, this is a real-life vacation comedy starring Presidential candidate Mitt Romney and the family dog.

It’s pure comedy when Chevy Chase’s character “Clark” forgets to untie aunt Edna’s dog from the bumper of the hideous green family station wagon and who didn’t laugh when Clark got pulled over by a motorcycle cop holding only a leash and an empty collar? After-all, that was only a movie but in a freaky real-life coincidence, Mitt Romney was also on a family vacation in 1983 when he used horrible judgement to solve the problem of not enough room in the cabin of the family station wagon. Mitt’s solution resulted in him literally strapping the family dog, a large Irish Setter named Seamos, to the roof of the vehicle which was bound for Wally World, I mean Canada. 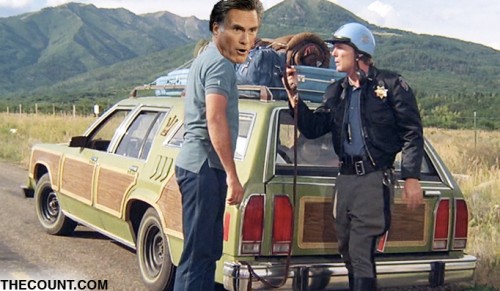 Alas the Romney-mobile finally arrived to their destination and thankfully Seamos was still among the living, meaning that the K9 had come through the whole chilling ordeal suffering only extreme fear, extreme cold temperatures and extreme humiliation as he was forced to poop on himself (Seamos, not Mitt) all while trapped in his flying dog carrier. Seamos later required medical treatment and was diagnosed with highway-borne gastric distress. Eh?

Maybe it’s time we all took a look at the bright side of this odd adventure, at least Seamus arrived alive and in one piece which is more then we can say for poor aunt Edna and her pooch and while we’re on the subject, what ever happened to Clark? Well in the movie the entire family finally arrives only to discover a lone security guard (John Candy) who informs the exhausted family that the White House, I mean Wally World is closed for the season.

Now this about the time that I always get a little confused, is it Mitt who uses a fake gun to get inside of Wally World or is it Clark who uses tons of money to get inside the White House? Hmmm, I guess we will have to cast our votes and wait for another vacation sequel…