JERSEY SHORE, NJ. (THECOUNT) — Hundreds of “clinging jellyfish,” known for their small size and powerful sting, have returned to the Jersey Shore just in time for the kick off to the summer season.

Memorial Day weekend beach goers are being warned of the tiny invasive-species jellyfish that were discovered in recent weeks in the Beaver Dam Creek area and in the northern end of Barnegat Bay, said Paul Bologna, director of the Marine Biology and Coastal Sciences Program at Montclair State University. 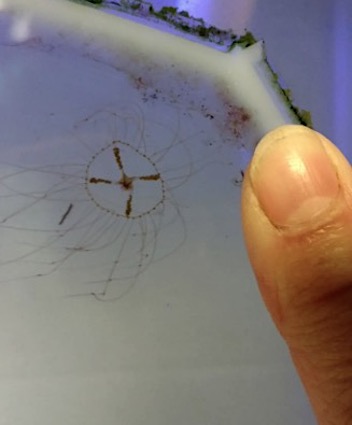 Bologna said he and his team recovered 294 of them. He told Patch that the jellyfish were not full-size, ranging from 1 to 9 millimeters in diameter.

The Department of Environmental Protection told Patch that it will send out an advisory probably on Monday.

Last year, the DEP advised recreational users in the same area to exercise caution following confirmation of the presence of clinging jellyfish, a non-native species with a powerful sting.

Geo quick facts: The Jersey Shore is the coastal region of the U.S. state of New Jersey. Geographically, the term encompasses about 141 miles of oceanfront bordering the Atlantic Ocean, from Perth Amboy in the north to Cape May Point in the south. The region includes Middlesex, Monmouth, Ocean, Atlantic, and Cape May counties – Wikipedia.