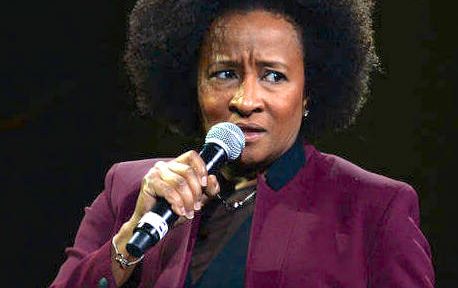 Comedian Wanda Sykes resorted to flipping off nearly the entire TD Garden audience as she was literally booed off stage last night after ranting about President-elect Donald Trump being a racist.

Thousands of comedy lovers who turned out for the 22nd annual Comics Come Home fundraiser were having none of it, booing Sykes as she cursed the crowd and departed the stage, in true Michael “Kramer” Richards style. Sykes, who was the fifth comic to take the stage at the benefit for The Cam Neely Foundation for Cancer Care, was roundly booed by many of those in attendance after the lesbian comic blasted the newly elected president for being a racist and a homophobe. “I am certain this is not the first time we’ve elected a racist, sexist, homophobic president,” she said. Although other comics, including Worcester native Denis Leary, waded into politics during their sets — Danvers’ own Nick DiPaolo was booed during his — it seemed the crowd reacted far more harshly to Sykes’ take on Trump and the California comedian was quick to fire back. “(Expletive) you, (expletive) you, (expletive) you,” Sykes said to the audience members who were booing her set at the country’s longest-running comedy fundraiser. h/t bostonherald The booing began about five minutes into Sykes’ performance until the has-been comic was forced to exit stage left.