Marco Rubio Fuels Rumors He’s Dropping Out After Doing THIS 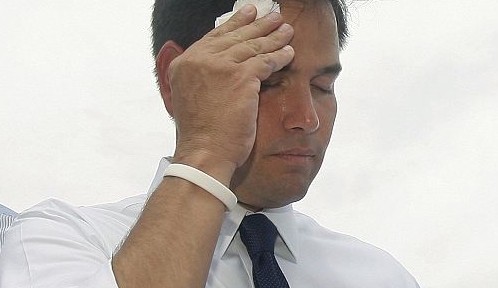 Right before he is set to appear at the Fox News Republican debate, Marco Rubio has quietly cancelled two of his scheduled campaign stops. The move has created suspicion on social media that the senator may be quitting the presidential race.

Rubio was set to appear in Baton Rouge, La., and Lexington, Ky., but cancelled both events giving venues and supporters alike, short notice. The campaign gave no reason for the cancellations. People are still able to register for the events over Eventbrite. What’s more, the campaign offered no reason for the cancellation with the venues. Out of the three top Republican contenders for nominee, Rubio only managed to secure one victory in Minnesota, building his delegate count to 110. Comparatively, Trump sits at 319 so far with Cruz at 226. h/t westernjournalism Don’t feel too bad for Rubio, if he does quit, he still gets to go home to his former Miami Dolphins cheerleader wife, Jeanette. If Rubio were to drop out of the race, it is highly probable he would give his support to Ted Cruz in an effort to prevent Trump from securing the nomination.