Check Out This List Of Celebrities Who Own Fast Food Franchises 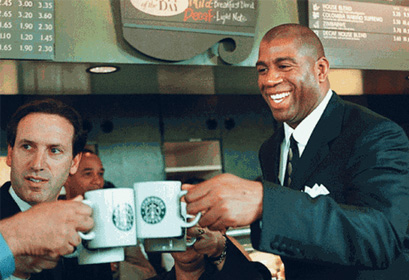 The fast food industry has long been the strong recommendation of many a celebrity business manager for those who find themselves newly rich, however, as of late, with fast food profits dwindling, what was once billed as a long term investment, (as was the payphone,) is now going the way of the landline.

The following is a short list of celebrities who are fast food franchisees. Before Kanye West decided that luxury fashion was his true side passion, he bought 10 Fatburgers in Chicago in 2010, though one of his locations folded just one year later. The Florida rapper loved WingStop so much that he decided to buy nine franchises around the country.

On top of his Margaritaville and Cheeseburgers in Paradise restaurants, Jimmy Buffett has owned several Krispy Kreme donut shops in Palm Beach County Florida since 2000. NBA superstar-turned-business magnate now boasts a sprawling empire across multiple industries. Among his many properties are up to 30 Burger Kings, and he previously owned more than 100 Starbucks stores before he sold them for an estimated $27 million in 2010. Denver Broncos star quarterback Peyton Manning invested in 21 Papa John’s pizza joints in Colorado in 2012. In an interview two years later, Manning hinted that the timing of the decision may have had to do with the coinciding marijuana legalization in the state. h/t mashable

In the end, franchises are here to stay as they are a convenient investment option for celebrities who want to put their excess money to work for them, but do not want to take the time to operate it.