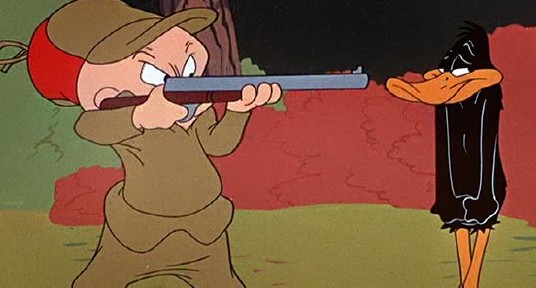 Atlanta cops are investigating what they are saying was, “offensive graffiti,” discovered sprawled on a parking garage wall over the weekend.

The graffiti, which some deem racist, depicted cartoon character, Elmer Fudd dressed as a police officer with a sign that reads, “Negro Season.” The disgraceful tag has since been removed. The graffiti appeared overnight on Friday in Midtown, police say. Atlanta police Sgt. Greg Lyon told WXIA the image sickens him. ‘I don’t think of Atlanta as that type of city,’ he said. But what kind of city the graffiti suggests Atlanta to be was not entirely clear. However, tensions in recent months have continued to flare between communities of color and local police forces over what many perceive as the unfair treatment–and killing–of minorities at the hands of cops. h/t dailymail The graffiti remained on the building at least 48 hours over the weekend before being covered up by local crews.