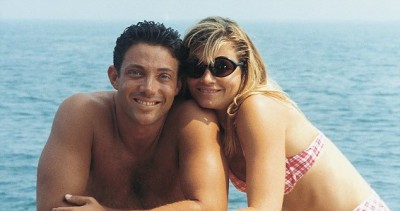 Fraudster, Jordan Belfort (L) with his second wife, blonde Miller Lite model, Nadine.
Jordan Belfort is commonly thought of as the original Gordon Gekko, flawed anti-hero of Wall Street, played by Michael Douglas, who pronounced greed was good and lunch was for wimps. Belfort went from a nobody to founder of a Wall Street stockbroker firm, living like a sultan with an endless supply of money, girls, drugs, executive playthings and appallingly outrageous office behaviour. BelfortÕs story sounds fictitious. In fact, it is a true and fair account of the suicidal excesses of the 1980s and Õ90s. As a teenager, Belfort wanted only Ôto become rich, to be a wild manÕ. So he worked hard on becoming an entrepreneur, selling ice creams and meat and generally exploring business. He soon found himself in Wall Street Ôbecause that was where you went to become richÕ and, in 1989, he founded stockbroker Stratton Oakmont. Millions of euros of profit financed an Olympic-standard drug habit and debauched lifestyle. Many of his deals were illegal, including shifting cash to Switzerland with the help of his wifeÕs aunt. His wife forced him into rehab after he attacked her and endangered his daughterÕs life. But soon after he cleaned up and rescued his marriage, he was arrested and imprisoned for 22 months. Now a free man in recovery from multiple addictions, Belfort had Brad Pitt and Martin Scorsese brawling over the movie rights to The Wolf Of Wall Street, his extravagantly entertaining new memoir. Scorsese bid Û400,000 and won.
Copyright: Jordan Belfort