I think if I had to pick one thing that eventually brought down OJ Simpson, it would be his reported drug use, i.e. cocaine.. It came out today in testimony that OJ’s girlfriend also has her own drug issues, bad ones, like the time she when on a bender, which resulted in cops responding to her OJ sponsored apartment over a “foul stench.” That stench was her cat which had died after not being fed for weeks.. 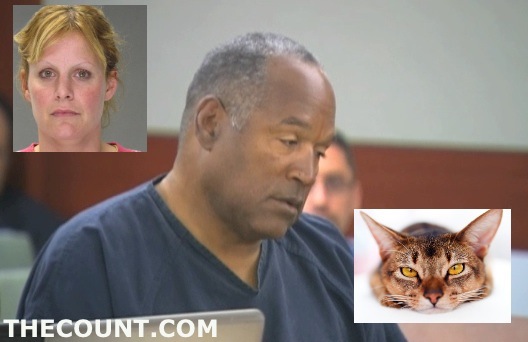 All this mess was revealed today but actually occurred back in 2002,

Police found a dead cat inside the apartment of O.J. Simpson’s ex-girlfriend after a neighbor reported a foul odor.

Miami-Dade Police on Saturday went to the apartment of Christie Prody, who once dated Simpson, after a neighbor said she had not seen the woman in a month and thought her orange-and-white cat might be inside.

Police then asked county firefighters to break open the door.

“It was a horrendous smell in the hall,” said neighbor Ruth Einhorn.

Police found the dead cat in the doorway and clothing scattered on the floor of Prody’s apartment along with semi-packed luggage, according to a police report.

Simpson was questioned on Sunday after officers at the scene referred the matter to a missing persons unit. Simpson told police he had spoken to her on Sunday morning and she was “OK and out and about.”

Simpson’s attorney, Yale Galanter, through a spokeswoman, said it was “absurd” to connect the former NFL star to the case.

“They don’t date anymore. O.J. didn’t even know that she had a cat,” said Valerie Zucker. “Yale feels this is absolutely absurd to be asking O.J. to comment on the fact that his ex-girlfriend’s cat was found dead.”

No missing persons report have been filed in the case, Miami-Dade Police spokeswoman Nelda Fonticiella said Monday. She said she did not know if Prody had been located. Source.

It was common knowledge that back in OJ’s married days, he used to regularly sponsor LAPD for coke sessions at his house.. It was a real hang out for cops!