The same daredevil that crossed Niagara Falls is now tightrope walking across the Florida highway at 180 feet above the ground — with no net! 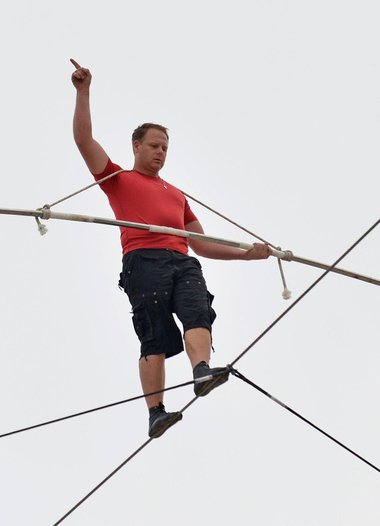 (CNN) — Daredevil Nik Wallenda will not need a passport for this trip.

But just like his historic walk from United States to Canada, across the Niagara Falls, his life will be on the line. Or should we say on the wire.

Wallenda will walk across a skinny, steel wire Tuesday morning 180 feet above a Sarasota, Florida, highway.

Unlike that famous jaunt some 200 feet above the Niagara Falls last year, Tuesday’s stunt will be without a safety tether.

“What I do is dangerous,” Wallenda told CNN affiliate WFLA. “Whether I am performing at the circus or performing the walk across the Niagara Falls.”

Thousands are expected to watch the walk, and businesses in downtown Sarasota are hoping to cash in. Police will halt traffic during the stunt.

Wallenda is the first person in recent history to cross over the actual falls.

He hails from multiple generations of high-flying daredevils.

His great-grandfather Karl Wallenda died at 73, attempting to walk between two buildings in Puerto Rico in 1978.

Last June, Wallenda captured the nation’s attention during his 25-minute agonizing amble above the roaring rapids of the Niagara.

Wallenda, a U.S. passport tucked in his pocket, pumped his fist in the air and sprinted the last few steps on the two-inch-wide wire.

Not only were family members there to greet him with hugs when he finished the feat, Canadian custom agents were also waiting.

What is the purpose of your trip sir, an agent asked?

“To inspire people around the world to follow their dreams and never give up,” Wallenda said, pulling his passport out of a waterproof bag.