STACEY DASH SPEAKS: IN HER OWN WORDS, A Lot Of Damn Words

Dejected Romney supporter, Stacey Dash, woke up today and wrote this whopper of a concession speech that focuses on where we are all headed in this country, something to do with a hell and a hand basket…

The other day I woke up and watched my daughter sleep, so sound, so perfectly at peace. A
thousand thoughts and memories flashed through my mind. I remember being a child of that
age, with no concept of adulthood and the responsibilities we take on with maturity. Now I know
the weight of those responsibilities, of being a parent, a working woman, and it frightened me. 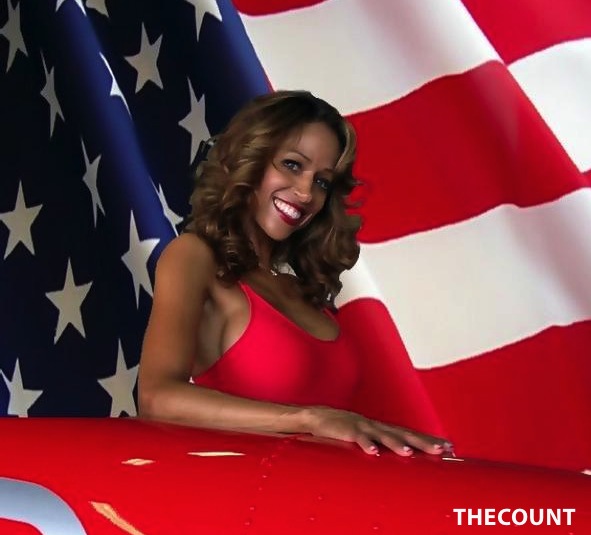 As a single Mother my main concern is for providing for my children and myself. It is especially
important to me that they have the opportunity to attend college. This is what I’ve worked so
hard for. I have, like many other citizens of the United States, been worried and upset by the
tremendous downturn in the economy, and the slow path to recovery.

I freely admit that presidential politics was not something I had much time for before the 2000
election. With Gore and Bush fighting out to the last hanging chad, it was an experience that
made me turn even further away from politics.

Two wars and a recession later I became newly invested in presidential politics by Barack
Obama. I voted for Obama in 2008. Yes, I was part of the overwhelming majority that swept
President Obama into his historic election!

I hadn’t known anything about him until he earned the Democratic nomination. He’s brilliant,
understated, ethical, a great husband and father. President Obama will always be remembered
as one of the greatest leaders this United States of America has ever known.

The fact is, our country gives us the right to vote for whomever we choose. Moreover, I am not a
spokeswoman for all women, or for minorities, or for single mothers… I am only one vote.
Together we all choose who will lead our country.

At the end of the day we are in this together. This is Our American Family. I do not want to be a
part of the hateful voices insulting each other. I want to be a part of the voices that helps shape
the future. Don’t you? Perhaps I publically endorsed Romney from a slightly naive place,
thinking that I could speak my voice without being criticized in such racially charged and hateful
tones.

People get it wrong. My vote for Romney isn’t a vote against Obama. That’s not how full
participants in the democratic process operate. We vote for candidates and we vote for
issues.

Like most Americans I was insulted with the idea that Obama was only elected because he was
black, that people of color wanted one of their own, regardless of what sort of leader he would
make. The same idiots make the argument that white guilt is why so many Americans voted
Obama into office in the first place. That rhetoric is what helps divide this great nation. I didn’t vote for Clinton because he was white and neither did anyone else. The skin color of candidates
needs to be the last thing discussed, if at all.

I’ve been fortunate enough in my career to have earned a considerable income. I am a fiscal
conservative. I like the simplicity of the plan to lower taxes. I feel I’ve paid out a substantial
amount over the 20 plus years I’ve been working. I’m also a woman. And as a single Mother
who happens to be half-Bajan and half-Mexican, I have concerns, which cover many topics and
issues.

I haven’t heard much from anyone (including the people heaping insults my way) about the
great things Obama HAS done for our country, like repairing the infrastructure of our highways,
bridges and train rails and creating a lot of jobs by this program. I am so grateful for what his
administration has done with the Settlement Act of 2010, which took great bipartisan effort to
close a painful chapter in American history. That alone sets me apart from some people in the
Republican Party. But it cannot be overemphasized that this happened due to bipartisanship
between both parties. Republicans and Democrats both made painful compromises and
stayed up past their bedtime. They forced the democratic process to work and the will of the
people was done! That’s what attracted me to Romney. He had this kind of bipartisan success
as governor of MA.

I also don’t understand why more people aren’t acknowledging the good that has come about
thanks to Romney’s Massachusetts medical coverage for all citizens. In addition, Romney’s
business acumen is sterling. Our country needs a savvy business manager with the ability to
work on both sides of the aisle. Paul Ryan is another brilliant mind with a viable plan for the
economy of this country. They’ve injected so much energy into the race. We need that ambition
and focus to get our country back on its feet.

That said, I haven’t heard any conservatives but Colin Powell giving sufficient credit to Obama
for the unprecedented action it took to take out Osama BIn Laden. If anyone can be blamed for
the free-fall of our economy, it is this coward Bin Laden and his psychopathic henchmen.

I voted for the Romney ticket because I was inspired by their promises of working tirelessly to
create a strong economy as their first objective. I have other issues that are close to my heart
like equality, and women’s rights, and the benefits of strong public schools. I realize on these
issues I’m entirely progressive. There are plenty of moderate Republicans who feel exactly the
way I do on these issues. I don’t think we have to trade one for the other. The main objective of
our nation must be repairing the economy. All our social concerns must come after this. Without
a stable economy our great nation falls.

My support for Romney came with acknowledgements of the work that they have done, but also
for the work they will do in the future. I hold each of these men to the highest standards.

In the event that Romney wins the election, I expect them to elevate the platform of the GOP
and become more inclusive, less exclusive and more inventive, especially as it comes to social
issues including women’s health, gay rights, equal pay and immigration. Ok, this is a lot to hope
for but if we insist that the politicians that represent us do their job, for the and by the people,
anything and everything is possible. Presidents put together outstanding cabinets and this is
where a greater perspective is realized.

In the event that Obama is re-elected I expect them to work a whole lot harder to bridge the
divide between political parties, end the gridlock and get America back to work! Welfare reform
is also in order. An elderly woman stands in the same grocery line pinching pennies to buy a
can of soup while a woman is buying marshmallow fluff with food stamps. As times have
changed, welfare policy needs to keep stride, just like every other issue.

Ultimately I know that what Stacey Dash thinks about who will be the next president of the
United States isn’t that important in the scheme of things- but I feel a desperation for the country.
The fact is, that when the two parties are not working together, it makes things worse! Bring me
a leader from either party that can get this unstuck. Non-partisanship is what will get Americans
back to work and the homeless back on their feet. Whoever is the next president must break
gridlock and do the will of the people. Stop pandering to partisan politics while our great nation
flounders.

Ten hours later, President Obama has been re -elected. I congratulate him. No he was not my choice, but he was the choice of the majority of our country. I do respect and appreciate that the country came together to make a choice.
So for that I applaud Americans.

Although I am disappointed that Governor Romney and Congressman Ryan did not win. I am
hopeful that President Obama will lead us to becoming the great UNITED STATES OF
AMERICA that thrives.