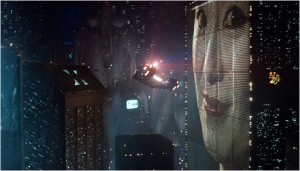 The 1982 Sci-Fi film Blade Runner, which starred Harrison Ford, is being excavated. Not that is wasn’t one of the most amazing films ever and just fine the way it is, but you know how it goes these days… We LOVE recycling! No series talks yet to ‘remake’ the movie, but here’s something to hold you over in the meantime…

Welcoming Blade Runner’s new baby relative into internet land… Tony and Ridley Scott announced that they will be creating a web series named “Purefold”, which will be ‘set at a point in time before 2019 in Los Angeles’. The series will consist of 5- to 10-minute shorts, aimed first at the Web and then perhaps television.

NYtimes reports: “Mr. Scott, his brother Tony and his son Luke are developing the project in conjunction with the independent studio Ag8, which is run by one of the creators of “Where are the Joneses?” a British Web sitcom that solicited storyline suggestions from the audience. Similarly, “Purefold” will harvest story input from its viewers, in conjunction with the social media site FriendFeed.

But the series won’t be hewing too closely to the specific characters or situations in “Blade Runner.” Some of that material stemmed from the Philip K. Dick novel “Do Androids Dream of Electric Sheep?” which the “Purefold” creators do not have rights to.

“We don’t take any of the canon or copyrighted assets from the movie,” said David Bausola, founding partner of Ag8, who said he hoped the series would debut later this summer and that the first episodes would depict events about two years into the future. “It’s actually based on the same themes as ˜Blade Runner.’ It’s the search for what it means to be human and understanding the notion of empathy. We are inspired by ˜Blade Runner.’”

[Super cool!!!] In an indication that the filmmakers are interested in exploring a new kind of collective, social creativity, the episodes in the series will be released under a Creative Commons license, marking the first time a major Hollywood director has embraced that alternative licensing scheme. The license means fans of the series can take the episodes and remix or otherwise repurpose them [awesome!], and even make their versions available commercially under the same license.”

A Blade Runner ‘remake’? Do you hear nails on a chalkboard? Could it happen!? Would they dare? Could they do it ‘right’?

Author Dean Poling of Valdosta Daily Times states some great points about this futuristic movie’s not-so-futuristic props. If Blade Runner were to be remade and continue to be set in the time 2019, technological changes would defenitly ensue. Read his points:

In the world of “Blade Runner,” life-like sentient androids can hide among the general populace. There are flying cars and skyscraping places to park them. While these things seem unlikely to happen within the next 10 years, consider what this 1982 movie fails to predict.

Granted, cell phones may be gone in 10 years, but that’s unlikely. Or they may look differently, but some form of cell phone will likely be around and owned by the majority of the populace in 10 years. A 2019 pay phone in “Blade Runner” is almost as fantastic as the possibility of sentient androids. But it also makes “Blade Runner” in 2009 look like an anachronism.

There is only a small sign of the personal-computer revolution in 2019. Ford uses some sort of computer device in his home. But what may have appeared high-tech in the idea of a future personal computer in 1982 seems primitive by the standards of 2009, and almost ridiculous to suppose such a rustic-looking thing would be state-of-the-art in 2019.

Yet, who in 1982, could have predicted the rise of personal computers, cell phones, Internet, e-mail, video games ” not to mention phones that can perform the functions of computers, record players, etc. These items didn’t exist in 1982, and, if they did, they weren’t available as a mass-market item. In many cases, the stuff leading up to what is available today had barely got off the ground then. CDs and DVDs weren’t on the market, and the concept of renting an old movie, like “Blade Runner” is now, and watching it at home on a VCR was something new then.”

“I’ll be the first guy to star in the remake of ˜Blade Runner’!”

Anything is possible Penn!