I don’t care what the circumstances, I just love it when parents throw caution to the wind and actually decided to discipline their kids for a change! In this case, we have a disrespectful teen and the parents who forced the 13-year-old to hold up a humiliating sign at a Florida intersection for and hour and a half back in March. 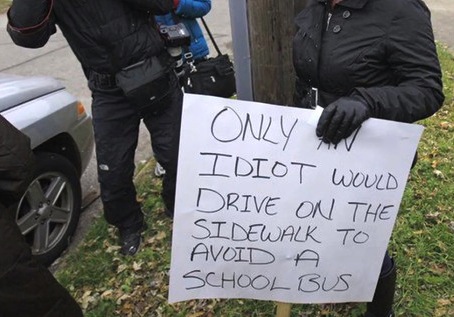 A report out today from Yahoo Newsrecapped the bizarre news story that took the Crestview community by surprise.

The story began locally, but has now piqued the attention of many across the country, some of whom are perplexed over why parents force a girl to hold up a humiliating sign as punishment.

“I’m a self-entitled teenager w/no respect for authority. I’m also super smart, yet I have 3 ‘Ds’ because I DON’T CARE,” read the sign (pictured here).

The parents hatched the idea about the public shaming from an idea shared with them years earlier by a Christian friend. When the girl began acting out, showing signs of disrespect to adults and losing interest in school, based on her falling grades, the parents put the plan into effect.

With her father standing by her side the entire time, the girl was forced to hold up the shaming sign as punishment.

Motorists snapped photos of the teenager and soon the images were uploaded to Facebook and other social networking sites. Police were called to the scene, but soon left after realizing the girl was in no danger. Or was she?

That’s when the backlash began.

Many people lashed out at the parent’s decision to humiliate their child, citing that the punishment lowers a person’s self esteem and could even bring about thoughts of suicide.

Renee Nickell, the girl’s mom, said this about the incident after the stream of comments flooded social media:

We spend so much focus on not wanting to hurt a child’s self esteem that we don’t do anything. Walk a mile in someone’s shoes. We must undo at home what the world tries to tell her is better.”

It turns out that the girl began acting out after her uncle (mother’s brother) was killed in Afghanistan in 2011. The teen was very close to him and after he died, she sank into deep depression.

Despite the parents forcing the girl to hold up the sign, she hugged them and has shown signs of improvement in her behavior. Was it a short-term fix? source.

Is public shaming of kids ever a good idea?