15 Days In Jail For Hockey Coach Who Tripped Kid On HANDSHAKE!

Watch this Vancouver father purposely trip a kid hockey player during the HANDSHAKE! The bad dad was coaching his son’s minor league team. He was busted after the episode was caught on tape… Now he will serve 15 days in jail for assault. 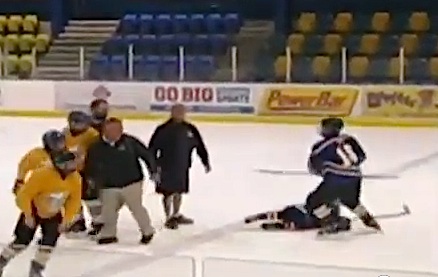 Martin Tremblay must serve 15 days at a provincial corrections centre for hurting the child because he was in a position of trust and was supposed to be a role model when he instead acted out in a post-game fit of anger, said Judge Patrick Chen. “Society will not tolerate the assault of children by adults,” Chen said Tuesday, as he read his ruling from the bench at provincial court in Richmond, just south of Vancouver. “(The sentence is) a signal to other parents heavily involved in the sporting activities of their children that they must be seen as models of good and acceptable behaviour and not as instigators of violence and of riotous behaviour.” Source.