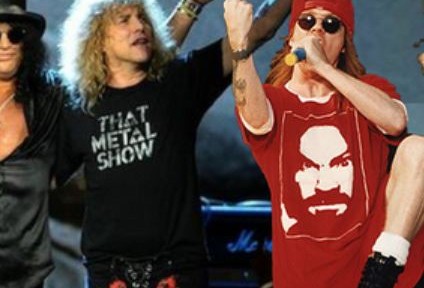 Rolling Stone magazine’s Andy Greene, snagged a great interview with former Guns N’ Roses drummer Steven Adler, just after his induction into the Rock and Roll Hall of Fame a week ago. 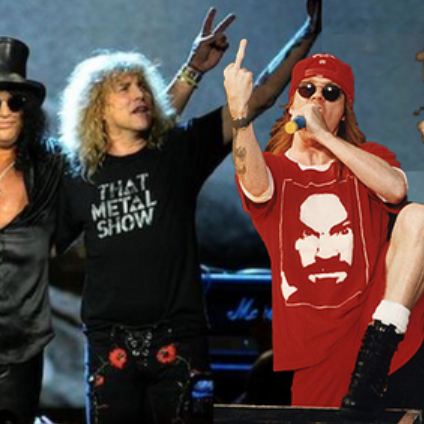 Adler who was my former neighbor believe it or not, has really pulled himself back together since his heroin days, and is being very productive as of late.

Adler tells Greene about the GNR reunion sans Axl Rose, and Adler states that he is ‘done with Rose’ for like… forever!

Rose, who Adler says is an ‘ass-backwards thinker’, wrote a cocky letter to the public and to the Hall, saying that he was not going to show up to the induction. Rose did not turn up, and he even wrote a follow-up letter, saying how he was happy he didn’t go. 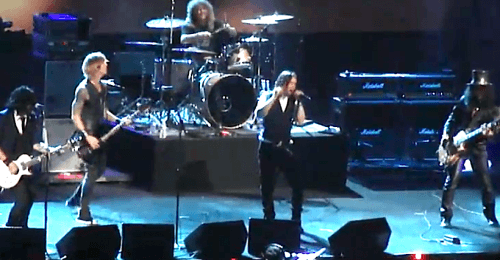 Adler explains how things went at the induction, and he also talks about what he has going on in his life currently.

Rolling Stone: How did the induction ceremony go for you?

Adler: That’s done. That’s totally out of my system. I was hoping that the five of us would have been there to play and show our respect to the fans, but the three of us who really do care about what our fans think and how much they’ve done for us were there, and we showed our love and respect.

In my thank-you speech, I ended it with the words of the late, great Freddie Mercury. “I’ve taken my bows, my curtain calls, you’ve brought me fame and fortune and everything that goes with it, and I thank you all.” I think that says it. It couldn’t have gone better. I showed my thanks and my love. Slash is really the main person from that band that is really super-duper…they’re all important, but Slash is the most important, because we grew up together, we started the whole thing together, so it was really great ending that chapter with him.

Rolling Stone: How did it feel playing those songs with Slash and Duff again?

Adler: It was great, and Myles Kennedy did a fabulous job…This is the only thing I’m going to say about Axl, and this is the last thing I’m ever going to say, ever, you’re getting it, is I feel blessed and thankful that he was a part of my life for that chapter of my life, but that’s it. That’s it. I have no desire to know him or work with him or do anything with him again. Letting go of that was like a huge weight was lifted off my body. I feel f****** free. Yay!

Rolling Stone: You and all the fans have wanted that reunion for years. That desire is gone on your part?

Rolling Stone: What true colors did he show in that letter?

Rolling Stone: He mentioned you in his first letter. He said, “Steven was at our show at the Hard Rock, later in ’06 in Las Vegas, where I invited him to our after-party and was rewarded with his subsequent interviews filled with reunion lies. Lesson learned.”

Adler: That doesn’t even make any sense. That’s Axl, he doesn’t make any sense, and that’s it, I’m done with him, I’m never mentioning him or talking about him again. That’s it. One last thing — god bless him.

Rolling Stone: How did the rest of the night go? Did you meet any cool people?

Rolling Stone: You also got to see your old friends Flea and Anthony Kiedis.

Adler: Anthony’s wonderful, I’ve known him for decades, he’s great. Flea is the greatest, it was so great, the way he mentioned me, and he mentioned my grandmother. He used to practice his trumpet for my grandmother, we used to play football in the street, and he’d come home from school and have his trumpet and practice for my grandmother. He mentioned it, and that was so great. That and he sent me a text saying the coolest thing that a rhythm brother could say to another rhythm brother, he said, “Stevie, last night, you were so deep in the pocket, it was beautiful.” So that was the coolest thing for Flea to say that, because he’s like the greatest bass player in the world.

Adler: Yeah, Myles Kennedy did a number on that other redhead. He did a phenomenal job, stepping into those big redheaded shoes. He’s got a powerful voice. Other than my new singer, if it wasn’t Myles Kennedy singing, I’d have wanted my singer to sing, because this guy’s amazing. I have the greatest new band, and it’s so great being part of a new band, being part of something that’s fun again and real. It’s real and it’s fun, and our new record we just finished, I recorded a whole record, I have 12 songs. In two weeks when Jeff Pilson gets back, he’s on tour with Foreigner, when he gets back, we’re going to do one more song. 13 songs. The new record will be done. I haven’t been finished with something in 22 years.

Rolling Stone: Do you see the Hall of Fame induction as the biggest moment of your career?

Adler: It’s the biggest moment of my career. Any musician who gets to be a part of that, it’s the biggest moment of their careers, of their life. It’s like winning the Super Bowl. I won the friggin’ Super Bowl, it’s the coolest thing in the world. I have a ring and trophy and everything. I didn’t get a ring, but I got a trophy.
I watched it on video, my guitar player came over with his computer and showed it to me. I was nervous, I don’t know how I sounded or how I looked, because it was me, and I was doing it. I saw it and said, “Oh man…” I was proud of myself. If I didn’t know me, I’d have been proud of me, and I was proud of me.

Rolling Stone: You guys really proved the band is bigger than one person.

Adler: Yeah. I’m telling the truth, I never heard a boo like that in my life [when Axl’s name was mentioned]. It was frightening. I was sitting there going, “Man, god forbid they were doing that at me.” That would be soul-crushing, you would think. But that redheaded guy, I was standing onstage, I looked at Duff and said, “You know what the crazy thing is, Axl’s so back-a** backwards that he probably likes it.” Instead of going, “Wow, that’s harsh,” he’s going, “Yeah, f*** yeah, I love it.”

Rolling Stone: Do you understand why that redhead seems so angry at everyone?

Adler: He’s got nothing in the world to be angry about. It’s so great to move on from that, to get that out of my life and out of my system. You ever have somebody that you know, but they’re not in your life, you don’t see them, you don’t talk to them, but you think about them, and it makes your stomach get all tight, and you go, “Son of a b****,” and you don’t even talk to the guy or see them — that’s what that a****** would do to me. It’s just great to not have that feeling in my stomach anymore. It’s good to move on. It’s like getting off of heroin, “Oh, I feel so much better, my god, what a relief, I’m not sick anymore.”

Adler: Yeah. I smoke cigarettes, and I’m really tired of it, I’m going to go see this doctor about taking that Chantix. I tried it before, it gives you terrible dreams.

Rolling Stone: What’s the secret to staying clean this time?

Adler: I got to a point of being sick and tired of being sick and tired, and it just got too much. I survived, and I think once you survive it and go through it, you grow up and you just start feeling different about things and about your life. When I was a teenager in my early twenties, I would get in a fight pretty easily, and I wouldn’t mind getting punched in the face. But I’m 47 years old now, I mind it now. So you just grow up and change how you feel about things.

Rolling Stone: How did you meet the guys in your new band Adler?

Adler: It might sound corny, but God brought them to me. That’s all I can say, is I was blessed again with another group of real guys, great musicians, just sweethearts. My new band, I’ve met a lot of groups in my day, and I thought my new band has the coolest guys, but the guys in Green Day are the coolest guys I’ve ever met in my life. Those guys play hard punk rock kind of stuff — these guys are the mellowest, sweetest, laid back hippies. They just love each other, they’re happy, they hang out with each other. In my band, me and my guitar player go out for breakfast every morning, and when my singer’s in town, we all three go out. Now with the new bass player, we all go out. We hang out and watch TV, listen to music, go over tunes.

Rolling Stone: It’s gotta be nice to finally be in a functional band.

Adler: It’s so great being part of a group, a group of guys. We’re all on the same page. We all want the same thing, we all have the same goals, and we all respect one another.

Rolling Stone: Are you going to put any Guns N’ Roses songs into your live set?

Adler: Out of the respect I have for what I did accomplish, my part of Guns N’ Roses, I am so friggin’ proud of — my part. So I’m f****** proud of that, and the fans are proud of that, and I love that, so of course, I’m going to play one or two, but it’s all about the new band and the new songs. Obviously, it would only be Appetite for Destruction, and I’m proud of that, but that’s 25 years ago. Every 15, 20, 25 years, a new rock and roll record needs to come out and a new rock and roll band needs to come out. We’re just the guys to f****** do it, and we’re going to do it. The last great rock band that came out was the Foo Fighters, and they were like 15 years ago, right? It’s 15, 20 years, the world is due.