After the economy tanked the banks got a huge bailout, however, the American people received little in the way of support from the government, and no support from the banks. In fact, after the banks got a sweetheart of a handout, they turned on their customers like wild animals, making a very bad situation much worse, callously hunting cash strapped folks, ripping the throat out of the only thing most had left, a place to call home.

Now comes news, the banks did not even bother to follow basic foreclosure procedure in their blood thirsty quest to displace so many unfortunate people. These are the same banks that ask you for your business, that is, if you’re actually fortunate enough to have any money left after paying the ransom of overdraft and other hidden fees.

Finally Bank of America has halted foreclosures in all 50 states and the only reason is, they got caught. At first BofA announced they would only stop the blood bath in 23 states and that was because those states required courts to finish the kill, so suddenly having the courts involved seems like a bad idea, but in the states where they would not need court approval, in other words, in states where families fended for themselves, it was still game on.

Speaking before the National Press Club in Washington, President, CEO and Atilla the Hun of BofA, Brian Moynihan said arrogantly, “We haven’t found any problems in the foreclosure process, What we are trying to do is clear the air, and say ‘We will go back and check our work one more time.’ ” Moynihan added that the review process is likely to last a few weeks, an obvious cheep shot aimed at terrified families who dare think the halt to foreclosures may have bought them some badly needed time.

The truth is, BofA and all the banks biting their collective nails to the nub now that their ill-willed actions have been exposed had better strongly consider checking their work as many times as it takes no matter how long takes, because by the time the smoke clears and the Senate returns from recess, there will surely be hell to pay in the form of a formal inquest, after all, the politicians have reelections to consider and historically, that is a very bad time to have fresh blood on your hands. 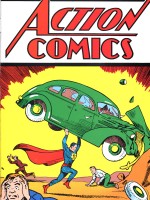 It’s known as the Holy Grail of comic books, Superman, Action Comic, No. 1 and it was sitting under the noses of a finically troubled family.

After exhausting all options to save their home from foreclosure a Southern family was sadly packing up the home that had been in the family since the 1950s when they stumbled on a super rare Superman comic book worth a whopping $1.5 million.

The family, who asked to remain anonymous, found a box containing 10 comic books in the basement, they jumped on the internet to see if they were worth anything, most were worth between $15 and $30, so the family discussed selling the comic books to get enough money to buy packing boxes, that is until they looked up the last one in the box, a pristine 1938 copy of the Man of Steel hoisting a car over his head, that’s when the internet results came up, revealing the comic was worth a mint.

The lucky ducks sent text picture of the comic to a collectibles broker who confirmed the worth and told the family he had recently sold a copy for $1.5 million. The family literally had to get the broker on the phone with the bank in order to halt the foreclosure.

Britney Spears spent another day at the Ritz Carlton pool in Marina Del Rey, CA. This time, she brought out her sons to play. Are the rumors true? Are her and Jason Trawick over? Were they ever really together, or was it just the media that created a ‘boyfriend’ for Britney? I never heard her officially state that Jason was her ‘boyfriend’.