TRUMP EFFECT? Apple Foxconn Says New iPhone May Be Made In USA 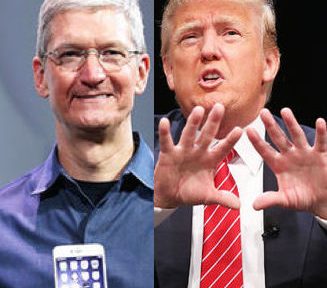 Apple Inc. is reportedly considering moving iPhone production to the U.S., according to a report by Japan’s Nikkei Asian Review. The company was asked by the tech giant in June to study the possibility, the report said, citing “sources.”

President-elect Donald Trump is is not even officially in the Oval Office and already he’s bringing jobs back to America as he pushes Apple and other companies who have moved offshore to make more of their products in the U.S. Apple’s stock slipped 0.4% in midday trade, while Taiwan-based Foxconn’s shares were unchanged in overnight trade. Apple’s stock has lost 1.4% since the election, while the SPDR Technology Select Sector ETF XLK, +0.63% has eased 0.1% and the Dow Jones Industrial Average DJIA, +0.07% has gained 2.9%. h/t marketwatch

In January Trump hit out at Apple for not producing enough of its products – including iPhones and iPad – in the US.

Speaking in Virginia back when he was a mere Republican hopeful, Trump said, “We’re gonna get Apple to start building their damn computers and things in this country, instead of in other countries.” All we are saying, is give Trump a chance..