Ronda Rousey, “The bigger my chest is, the more it gets in the way,” said Rousey in this week’s ESPN The Magazine, “Body Issue”.

“It just creates space. It makes me much more efficient if I don’t have so much in the way between me and my opponent.” I’LL SAY! OUCHY! 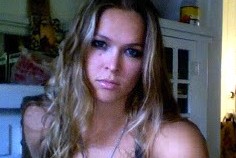 “When someone’s on your back trying to rip your head off, things tend to slip around a bit,” Rousey said.

“Gina Carano was an amazing fighter, and she had a fantastic rack,” Rousey said of Carano, later adding, “You don’t see big titties in the Olympics, and I think that’s for a reason.”

“I got kicked straight in the chest right as I was trying to adjust my bra,” Rousey said.