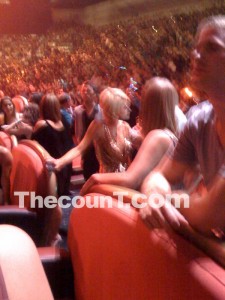 What do you do when you’re a big celebrity and you don’t have tickets to the Britney Spears concert? Well, you just ’show up!’ Reuniting Britney and Paris for the first time since their infamous panty-less paparazzi chaos…

Paris, her boyfriend Doug Reinhardt and Paris’ sister Nicky, entered the ‘ring’ and were escorted in by Britney’s manager Larry Rudolph and shown around by none other than Britney’s Dad Jamie Spears.
The Hilton entourage came over and literally stood right behind us for the entire show. Paris looked hot as always wearing a short shiny gold dress. What was the rest of the entourage wearing? Who knows! Paris caught my eye!

Nicky was mostly just conversing with her female friend, while Paris was getting cuddly wuddly with boyfriend Doug. They all did a little dancing to Britney’s songs throughout the show.
The audience loved it! Britney and the Hilton girls in one place! The audience snapped boatloads of photos of the Hilton entourage. The girls were really cool about taking photos with their fans.
It’s safe to say, Britney has come a long way since the last time her and Paris were in the press together!