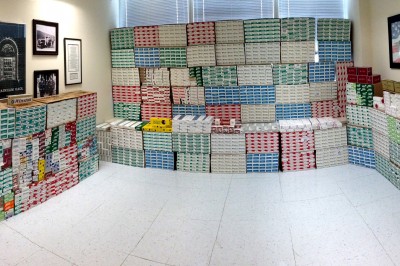 Staten Island man busted with more than 2500 cartons of untaxed cigarettes *** Defendant smuggled smokes from Virginia *** STATEN ISLAND, NY  Richmond County District Attorney Daniel M. Donovan, Jr. and New York State Department of Taxation and Finance Commissioner Thomas H. Mattox today announced the arrest of a Staten Island man who possessed 2,586 cartons of illegal cigarettes he intended to sell to clients throughout Staten Island and Brooklyn. Following a seven-month investigation, MICHAEL ZEKRY, 67, was stopped in New Springville on Nov. 5 at 12:30 a.m. while driving a white Ford Econoline van. Inside the van were approximately 2,035 cartons of Virginia stamped cigarettes. A search warrant executed at the defendants apartment yielded another 551 cartons of Virginia stamped cigarettes. Additionally recovered from inside the apartment was $40,000 in cash and an electronic cash-counting machine. Investigators also seized the defendants Ford van and another vehicle. Michael Zekry was a big-time cigarette smuggler who sold his contraband to clients across Staten Island, from the North Shore to the South Shore. He would do residential drop-offs, as well as deliver to grocery stores and nail salons. Months of dedicated police work by my NYPD Detective Squad has put him out of business and taken more than a half million illegal cigarettes off the streets, said District Attorney Donovan. Im proud to be a member of the New York State Cigarette Strike Force and want to thank Taxation and Finance Commissioner Thomas H. Mattox for his agencys assistance with this case. Said Commissioner Mattox: I commend District Attorney Daniel Donovan and his team for their commitment to fairness and their successful investigation of cigarette smugglers, Commissioner Mattox said. The New York State Cigarette Strike Force, announced by Governor Cuomo in March of this year, is an initiative that is already producing significant results thanks to a strong partnership betwe