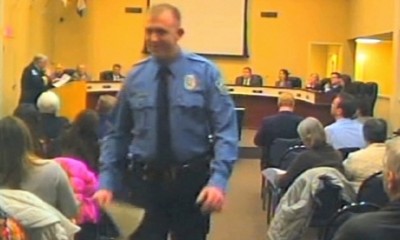 FILE – In this Feb. 11, 2014 file image from video released by the City of Ferguson, Mo., officer Darren Wilson attends a city council meeting in Ferguson. Wilson has told authorities that Michael Brown reached for the gun during a scuffle, the Times reported in a story posted on its website Friday night Oct. 17, 2014. (AP Photo/City of Ferguson, File)