Cleanup crews are on the scene of Bill Cosby’s Hollywood Walk of Fame star after it was defaced by vandals.

The Hollywood Chamber of Commerce released a statement saying cleanup work was underway on Friday morning. 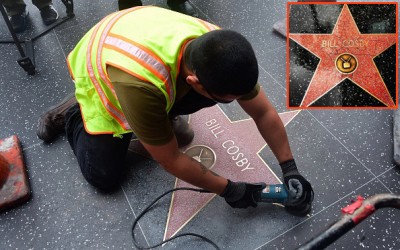 A local news station posted a photo of the defaced star, saying it was received from a viewer on Thursday. The star had the word “Rapist” scrawled three times on Cosby’s star.

The comedian’s star was placed on the Walk of Fame, a California state landmark, in 1977.